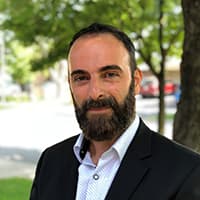 Dr. Yousif is Assistant Professor of Christian History and Director of Master of Theological Studies (MTS) Modular Program at Tyndale University. His teaching portfolio includes multiple universities and seminaries in Canada and the Middle East, including University of Toronto and Arabic Baptist Theological Seminary in Lebanon. His interdisciplinary research focuses on the history of Middle Eastern (Syriac) Christianity, Christian–Muslim relations, and Islamic religion and culture. Dr. Yousif also serves as member of the Academic Senate at Tyndale University and as member of Board of Directors for The Canadian Society for Syriac Studies (CSSS) at University of Toronto.

Rev. Yousif is an ordained pastor with Canadian Baptists of Ontario and Quebec (CBOQ) and he serves as a lead pastor at Middle East Baptist Church (MEBC) in Mississauga since 2007. He is an Assyrian-Iraqi Christian, who moved to Canada more than twenty-five years ago. He resides in Mississauga with his wife Helen. Previously, Dr. Yousif was a practicing biomedical-electrical research and development engineer for a number of years.

All Board of Governors Members »