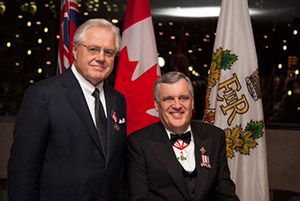 The gala was hosted by the Honourable David C. Onley, Lieutenant Governor of Ontario and Mrs. Ruth Ann Onley as way to mark a close to Her Majesty’s Diamond Jubilee Year. Throughout the year there were numerous recipients who were chosen because of their contributions to Canadian society.

After the recipients received their medals there was an hour of entertainment provided by some of Canada’s best known artists and members of the Order of Canada including Michael Burgess, Liona Boyd and Bruce Cockburn.

Tyndale’s current President, Dr. Gary V. Nelson stated, “We are pleased that Brian has been recognized for the prophetic evangelical voice he has offered in Canada. No one has had a more significant impact on institutions, churches and society.”

Dr. Stiller served as President of Tyndale University College & Seminary from 1995 to 2009. Under his leadership the Bible College transitioned into a fully accredited university college. He was the visionary and catalyst in purchasing the 56-acre Bayview campus from the Sisters of St. Joseph of Toronto.  He has spoken around the world and written numerous articles and books. Currently Dr. Stiller is serving as Global Ambassador for the World Evangelical Alliance which serves approximately 600 million evangelical Christians around the world.