A Tribute to Bob Bernardo 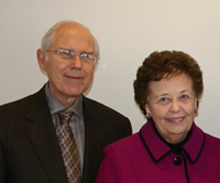 Bob Bernardo, a great friend and supporter of Tyndale, passed away early Tuesday morning following a very short struggle with cancer. For many years, Bob and his family have had a deep love for Christian higher education in general and for Tyndale in particular. It was Bob's passion for well-educated Christian leaders within the church as well as the marketplace that gave rise to the Bernardo Chair of Leadership, Tyndale's first endowed chair. Bob sat on the board of directors of The Tyndale Foundation for several years and chaired its Investment Committee.

Here are a few words from those at Tyndale who knew Bob the best.

"Bob’s faith in his King is something I will always remember. He trusted Jesus completely. 15 years ago, when I started at Tyndale, Bob told me that God’s promise is that all the money that’s needed for God’s work is already in the hands of God’s people. It is our responsibility to communicate God’s work to them. This was a huge encouragement for me – that our God lacked nothing. Bob’s quiet way of inspiring Tyndale to be transparent and walk with the Lord has made an impact on all of us. He gave us the first endowed chair at Tyndale and this has set the foundation for others to follow his example." - Winston Ling, Vice President, Chief Enrollment Officer

"I have many memories of Bob over the years -- his keen analytical mind in helping steward Tyndale's investments, his understanding of the value of Christian higher education, his concern for the overall health of the school, his gentle spirit, his tenacity on the golf course, and most of all his deep faith and belief in the sovereignty of God. But the most powerful memory that will stay with me forever took place just ten days before his passing, when Winston and I had lunch with Bob and shared recollections about his faith, his love for the church and his passion for God's work in this world. He recounted the early days of his involvement with Tyndale and with his church, which was particularly special for me since his church is also mine. He reiterated his vision of the role he hoped Tyndale would play in advancing the cause of Christian leadership within the church and the marketplace. He spoke of his involvement over the years with various outreach ministries, how they had evolved over time and how important it was that they remain viable and vibrant. This final time with Bob was a very special gift which I will never forget and which I will always cherish. To me, he was truly an inspiration and a role model." - Randy Henderson, Senior VP Finance & Chief Operating Officer

"Bob Bernardo has over his lifetime had a remarkable influence on Tyndale. I came to know Bob when I took over the bankrupt schools in 1995. At our first corporation meeting he carefully made notes of the issues and what we planned to do. Over time, he accepted a position on the Tyndale Foundation Board and then as Chair of The Investment Committee. His due diligent nature and skills enabled the Foundation to grow and effectively manage its in-trust funds.

However, to see Bob only as a financially-conservative and prudent manager would be to miss his great skill which was to see the big picture. He and I had many conversations on what was needed to both enable Tyndale to emerge into significant influence and what the church of Jesus Christ needed.

That conversation led to developing a chair in leadership. He, Jeff Greenman (then Academic Dean of the Tyndale Seminary) and I travelled to Fuller Theological Seminary in California to check out their leadership centre and chair. Out of that experience, we crafted what today is the R. J. Bernardo Family Chair of Leadership, located at the Seminary. His family foundation, The Charis Foundation, underwrote and endowed the chair.

However, it did not end there. As we struggled with setting up this new chair, we made some mistakes along the way. He was not adverse to pointing those out, asking for input as to what we would do next and then encouraging us along the way.

The development of the chair of leadership was a critical moment in the history and progress of Tyndale. It not only was the first chair but it became a testing ground of growth and vision. What a brother he was to many of us, careful, wise and prayerful.

He loved students. He never tired of hearing their stories of grace, their struggles and their victories. He and Leslie attended events, encouraged me as president and always had word of vision to help us move upward and forward.

Whenever I was in charge of meeting, inevitably I asked Bob to close in payer. I loved to hear him pray. He had a way of encompassing us all in God’s love and power. I learned from Bob that a person who knows how to pray, knows how to live." - Dr. Brian Stiller, President, Tyndale Foundation