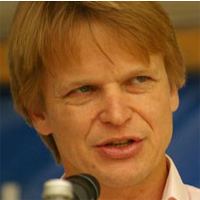 Hans Peter Royer was born in 1962 in Schladming, Austria. He went to public school for 9 years, before learning to be a professional car-mechanic for 4 years. After a time in the army he pursued training to become an Austrian certified Mountain- and ski-guide, ski-instructor and cave-guide and worked in that field from 1981 until 1989 in Austria, in the US as well as in Australia.

In 1987 he married Hannelore and they both attended Capernwray Bible-school in England in 1989. Since 1990 he has been at the Torchbearer-Center "Tauernhof" in Austria, where he was first in charge of the sport-programs and and then in 1991 was asked to take over the Leadership of the ministry.

Since that time he and Hannelore had three children and Hans Peter claims now that his most-climbed "mountain" is the pulpit.

He teaches about 25-30 weeks a year at Tauernhof and in churches and conferences in Europe and overseas, while Hannelore looks after their Bed&Breakfast, and the children. Hans Peter is the Assistant Director of Torchbearer International and has written several books (in German).