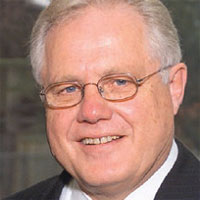 For the last 14 years, Dr. Brian Stiller has guided Tyndale University College & Seminary through adversity and set it on its current path of growth and expansion. Dr. Stiller has been appointed President Emeritus by the Board of Governors in appreciation of his years of service as President of Tyndale. Dr. Stiller has transitioned out of his active role at Tyndale to join the World Evangelical Alliance (WEA) where he was appointed as a Global Ambassador on May 31, 2011. While he will be greatly missed, the Tyndale community is grateful to Dr. Stiller for his dedicated leadership and direction.

As President, Dr. Stiller made incredible contributions to Tyndale. He steered the institution out of near insolvency in 1995, and led it to obtaining university status. Through fundraising and solid financial strategies, he has guided Tyndale through years of financial stability. As Tyndale has grown, Dr. Stiller has played an integral role in building a strong relationship with the Sisters of St. Joseph to make the dream of moving to the Bayview campus a reality. Dr. Stiller successfully led a campaign that raised $52 million dollars; $44 million was raised for the Uncommon Ground capital campaign and $8 million for endowed chairs with the help of Tim Hearn, the Chair of the campaign and the campaign cabinet.