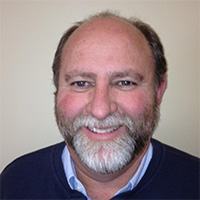 Rev. Roché van Wyk, director of Learn to Earn (South Africa), has a background in engineering, theology, urban issues & community development and intercultural studies. He is married to Janet, has two sons, Stuart and Thomas, is involved in Rotary and his local church and thinks best with a ﬁshing pole in hand.

Since 1995 Roché has been the Director of Learn to Earn (LtE). He took over what was known as the Bap-st Training Project within the very unstable poli-cal and socio-economic climate of post-apartheid South Africa. The project had a few sewing machines, approximately R9000 of personal funding available and two “staﬀ” members who had not been paid for 6 months. He commenced establishing and formalising what today is known as Learn to Earn. To date the organisa-on has never been in the red, has an annual budget of over R15 million and training facili-es that are valued at around R22 million. This has resulted in Learn to Earn being able to train around 500 people per year, with an outcome of over 72% of them becoming economically ac-ve or placed into further educa-onal opportuni-es