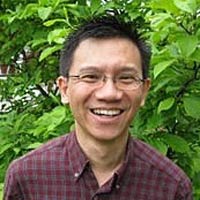 Shiao Chong is a Christian Reformed Campus Minister serving at York University and Director of a student club at York U called Leadership, Culture and Christianity. Ordained as a Ministry Associate in the Christian Reformed Church (CRC), and a member of Rehoboth Fellowship CRC in Etobicoke, I also attend Friendship Community CRC, which is close to York U. I am married to Martha, and a father of three daughters.

Shiao finds nourishment in the Neo-Calvinist Reformed Christianity stream in his explorations at rediscovering "3D-Christianity". He thinks deeply about diversity issues from inter-cultural issues to gender issues to disability issues within the church and Christianity. His interest in disability issues was sparked when his youngest daughter was born with Down Syndrome. Working in campus ministry, He, of course, also engage topics that university students engage in, e.g. creation/evolution, faith/learning, finding one’s mission/calling, discovering one’s identity, relationships/sex, environmentalism, postmodernism, etc.

You can read his blog: 3-D Christianity