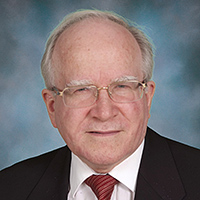 Dr. Doug Hayhoe reminds the graduating Bachelor of Education students that we move into a dark and uncertain world. We will find security and guidance as we follow Jesus, the Light of the World.

Dr. Hayhoe worked for many years as a science consultant and a board-wide science coordinator. He co-authored the Ontario textbooks on Science & Technology 4-8 (Pearson, 1999), Science and Technology Perspectives 7-8 (Nelson, 2009) and Science Perspectives 9-10 (Nelson, 2010). His current research focuses on teacher understanding of soil, water, and climate change, a Christian perspective on sustainability, and the interaction of faith and science in education. He has presented at conferences of the American Geophysical Union (2010, 2012, 2014), Soil Science Societies (2011, 2015), International Christian Community for Teacher Education (2012, 2014), and Canadian Evangelical Theological Association (2015). He has also published peer-reviewed papers in Weather, Climate, and Society (2011), Sustainable Agriculture Review (2013), Journal of Geoscience Education (2014), and the Canadian Journal of Soil Science (in press).