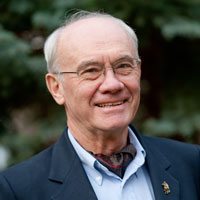 Dr. Victor Shepherd speaks about "the friend who sticks closer than a brother".

Dr. Shepherd has taught at Memorial University of Newfoundland, the Toronto School of Theology and McMaster University. Until his retirement in 2017, he was also Adjunct Professor at Trinity College and Wycliffe College, University of Toronto where he supervised doctoral students. In 2005 he was made Professor Ordinarius of The University of Oxford, U.K.

Author of 12 books (The Nature and Function of Faith in the Theology of John Calvin, Seasons of Grace, So Great A Cloud of Witnesses, Ponder and Pray, Making Sense of Christian Faith, Witnesses to the Word [translated into Turkish in 2004], Our Evangelical Faith [translated into Chinese in 2008], Do You Love Me?—And Other Questions Jesus Asks, Interpreting Martin Luther: An Introduction to His Life and Thought, A Ministry Dearer than Life, Mercy Immense and Free, The Committed Self: An Introduction to Existentialism for Christians), numerous audio-sets of lectures, as well as over three hundred articles, he has addressed learned societies both in Canada and abroad, including the North American Calvin Studies Society and the Oxford Institute of Methodist Theological Studies. Twice he has been invited to the International Calvin Studies Colloquium, those deemed to be the world's best one hundred Calvin scholars. He is a minister of the Presbyterian Church in Canada.