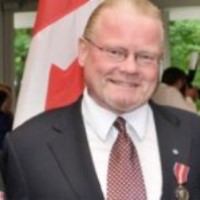 Michael Clarke details his life experience and struggles with moral trauma, PTSD and his experience with youth Ministry. He looks at the words from Psalm 25 and examines his journey during his life to find answers.

Michael was born in Windsor Ontario and raised in Brampton from age 10. He graduated from the California Centre for Biblical Studies in Culver City California in 1974, received a Bachelor of Arts degree in psychology from York University, Toronto in 1979, and college certificates in Policing from the Ontario Police College, Aylmer Ontario in 1980. From Wycliffe College, University of Toronto he received a graduate diploma in Christian Studies in 1998 and a Masters of Divinity degree in 2002. He studied for 7 years at the Toronto School of Theology, University of Toronto in the Doctor of Ministry program.

He has worked with mentally challenged adults and with senior citizens in residential programs. For 7 years he served as a Peel Regional Police officer in the uniform bureau, and in Special Services as an Underwater Search and Recovery diver, and a Fraud Bureau detective. He was highly trained as a specialist in Credit Card Fraud and in Fraudulent Copyright offences.

For six years Michael was director of Yonge Street Mission’s Evergreen Centre for Street Youth in Toronto, and for three and a half years was Minister of Youth & Community Outreach at Trinity Anglican Church in Streetsville. He is co-founder and past Executive Director of The Dam Youth Drop-in Counseling Centre for marginalized teens in Mississauga. Under his leadership the Dam won the YMCA’s Canada Peace Medal in 1996.

In 2001 Michael was appointed by an Order In Council as a part time Community Member of the Ontario Parole and Earned Release Board and served in that capacity to 2011.

In 2002 he was Executive Director of The Scott Mission, Toronto one of the largest inner city missions to the poor in Canada.

In 2003 he was ordained an Anglican Priest and served two part time curacies, one at Christ Church Brampton and one at All Souls Willowdale. Michael served as Associate Priest at Christ Church Brampton until 2010 with an extensive youth mentoring portfolio, and is still an Honorary Assistant priest there. In 2013 he was appointed Interim Priest in Charge at Trinity, Campbell’s Cross Anglican Church in Caledon Ontario. In 2016 he was appointed Priest in Charge, St Stephen’s Anglican Church, Hornby ON.

Michael traveled extensively throughout the world with World Vision, Christian Children’s Fund and the Anglican Church, conducting training conferences and program analyses with outreach staff working with street youth. This work took him twice to Romania, to Kenya in East Africa, South and Central America, twice to Mexico, to the USA, across Canada and several times to the Arctic.

Michael has three children, a son, Aaron who is a Visual Neural Scientist doing research in Ankara Turkey; a daughter, Amy who is a graduate of George Brown College Chef School and is married to Shaun Turner, an Anglican Canadian Forces Chaplain and together are raising three boys, Edwin, Clarke and Eli, and a girl, Jubilee; and a daughter Sarah who is pursuing a Master’s Degree at University of Toronto in Bio-medical Engineering, and raising Trinity. Michael married Cristina “Tina” Marie Irwin in 2001 and together they live in Brampton where Tina works and is very active as a volunteer in church and community activities.