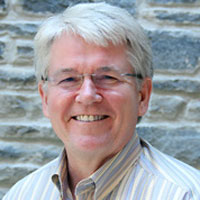 We are especially grateful to the Rev. Dr. Barry Parker, rector of St. Paul’s Bloor Street Anglican Church in downtown Toronto, for agreeing to bring a message to our community. In 2001, on a Tuesday morning in early September, Dr. Parker was scheduled to preach in the Tyndale Community Chapel at the old campus on Ballyconnor. No one could have predicted the events of that day, one we now know as  9/11. Our campus was thrust into a state of worry and shock as reports surfaced of the incidents in New York City and Washington. We were blessed that Dr. Parker, wisely and sensitively recognizing the gravity and enormity of the day, offered Tyndale words of hope and peace in the midst of the day’s tragedies.

Earlier this term, when Dr. Parker agreed to speak in our Community Chapel, we could not have foreseen our current reality. As it was in 2001, it is again – we are blessed to have Dr. Parker ministering to us. Dr. Parker is a long-time friend of Tyndale. He has taught at the seminary and served on the Board of Governors. And now after 20 years of fruitful and faithful service and ministry at St. Paul’s, Barry is retiring and this summer, along with his wife Cathy, will be moving to Edmonton.