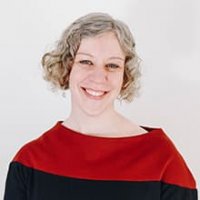 Dr. Beth Green, Tyndale University’s Provost and Chief Academic Officer, shares with us this week. Her message, “Numbers 27: Leading with Confidence Even When you are Anxious”, is a wise word in this season that has continued far longer than most anticipated.

Beth earned her DPhil from Oxford University and is a Fellow of the Royal Society of the Arts and a Senior Fellow at Cardus, a faith-based think tank in Hamilton. Beth publishes her research in international journals, including the British Journal of Sociology and Education and the Cambridge Journal of Education. Her peer-reviewed articles explore the intersection of faith, learning, and formation as they impact culture and society. Since joining the Tyndale community, Beth has served in several capacities including interim VP Academic for undergraduate studies during the fall 2019 term. She and her husband Leonel live in Burlington.

Good morning Tyndale community. It's a joy to be with you.

I've titled this reflection today “Leading with Confidence Even when You're Anxious”. But perhaps an even better title would have been “Doing anything with confidence, even when you're anxious”, because I don't want to leave out those of you who don't think of yourselves as leaders.

I had in mind a very broad definition of leadership when I wrote this, because I think a key call on our lives as Christians is to proclaim, to testify, to speak about Jesus.

The New Testament says we should be able to give a reason for the hope that we have and testifying to something, sharing good news, well, to me, that implies influencing a seasoning of all of the spheres of lives we find ourselves in, and it definitely implies being confident in the story that we share.

For a very long time I thought that confidence and anxiety were opposites and that you couldn't be confident if you were anxious. In this season of my life, I have come to realize that this is not true. Confidence and anxiety can coexist. Perhaps not peacefully, but there is a way to hold them together in a productive tension. I'm learning how to do this, and so this reflection will be a sort of confession, self help guide, and theological reflection rolled into one.

Allow me to introduce you to the five daughters of Zelophehad. Their story is recounted in Numbers Chapter 27 and I had never really noticed it until Tyndale’s president Dr. Kerr told us it was one of her favourite passages in Scripture, so I just had to look it up.

Let's read it together now. I will warn you, I'm going to duck out of pronouncing the family names listed in verse one. I didn't have time to check in with Tyndale's Hebrew scholars and getting people’s names right is important, so I will jump in at the end of verse one. But I want to say that the fact that we have the family names recorded here, particularly those of the five daughters, is encouraging to me.

It's encouraging because the Chronicler secures the veracity of this text using genealogy, and because the names of the women are not left out. They matter to God.

To summarize briefly, these five women stand to lose everything at the hands of a bureaucratic and patriarchal process. When the people are counted and portions of the promised land allocated, they will receive nothing because their father is dead. He had no sons, and they are not married. Rather than pin their hopes on a fortuitous marriage, Jane Austen style, they approach Moses and argue a carefully prepared case at the entrance to the tent of meeting. In other words, they represent themselves on points of legality in a male dominated space.

Don't tell me they weren't anxious. In an excellent analysis of this passage, the UK sociologist and theologian Dr. Elaine Storkey points out that the sisters do the preparation. They know and understand the law, but their confidence is ultimately in the Justice of God. They understand that they can appeal to God's justice even when it is imperfectly dispensed within society. The book of Numbers tells us that God told Moses to listen to them because what they were saying was right and the law was changed.

Change feels scary. Starting a new course, whether you're teaching it or studying it, feels scary. Not to mention that it might only be the first or the second time you've taught or studied for a course online. Coping with lockdown is anxiety inducing. Coping with the times when you do have to leave your home, and interact with people safely, is anxiety inducing. Even if you are doing OK, others that you love may not be, and you may be anxious about them.

There were similar but different unknowns for the people of Israel. An unknown land facing them, grief and bereavement and loss behind them. After the years of wandering a different generation was going to be entering the promised land. Would they know enough about the history? Would they lead in the same way? Would they understand what it meant to be a vulnerable person in this community? And would they remember that people's needs might be different? Would the new leaders love and obey God?

I wonder if some of those questions feel close to home for you, perhaps even in this season at Tyndale. We live in a society where leaders craft their public persona very carefully. This can include the over sharing of personal information to be sure, but the point always is to control the story and appear strong and successful at the end of it.

As I've stepped into more coaching and mentoring work, I’ve begun to understand that many people feel they will be judged more harshly if they admit to battling anxiety and impostor syndrome.

Moses is a leader whose own story was marked in its key moments by fragility and fear. If you’ve ever found yourself saying to God “I can't speak, I can't go there, I can't do this, I'm too scared”, then you are in good company.

I wonder if Moses remembered this when the five daughters came to put their case to him. Certainly, Moses had learned that the root of confidence and wise judgment was to seek for and listen to God's justice.

I get very anxious about things. You can't see my knees wobbling just now because they're below the camera, but I wouldn't be giving God the credit if I didn't attest to the fact that I get nervous about public speaking, taking big decisions, trying to listen, and to lead well.

There are three ways that this story and the story of the gospel helps me understand the proper place of confidence and anxiety.

God loves me. God loves us, full stop, not because of my CV, or because I rock an English accent in North America. He loves me because I bear his image.

One of the ways that we experience this love, is within the local community of friends and colleagues into which God has placed us. The church is meant to be a community that holds brokenness in common, even if we don't admit to it enough.

In the tent of meeting, God expected that the broken and the vulnerable would be welcomed, even if that had not always been the experience in practice. That fellowship must not be taken for granted.

In my experience, the love of God is both the beginning and the goal of the journey. I still need to do a lot of careful preparation, and walk in the wisdom and support of community, but the confidence to lead does follow from this.

This experience of leading a broken community, of boasting in Jesus and not in his own accomplishments, and relying on the spirit and power of God for discerning justice, led the Apostle Paul to quote this beautiful verse, and in conclusion, I want to pray it over us, the Tyndale community.

“No eye has seen, no ear has heard, no mind has conceived what God has prepared for those who love him.”