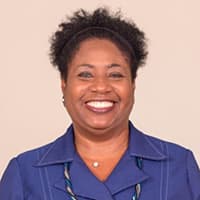 We are so grateful to have Dr. Vivette Henry, Assistant Professor of Psychology (Undergraduate Studies) join us. Dr. Henry's message is entitled “When you can’t find God, there is hope, because He knows where you are.”

She invites us “to reflect on our lives within the current COVID-19 season and on the painful reality of racism, in particular anti-Black racism.” She reminds us that “so many in our community and country are dealing with the pain of life reversals, economic hardships, sickness, and even death.” Dr. Henry will look at the story of Job. She says, “as Job looked for God in Job’s darkest period of life and could not ‘find’ Him, we know that God was always present, knew where Job was, and was at work in his situation.”

Dr. Henry has worked in the mental health arena for over 16 years, and was educated in Jamaica, the United States, and Canada. She brings a wealth of clinical experience in the fields of psychology, counselling, and education.

Greetings to you all. I must say that I'm honoured to be able to speak in this fashion, even as we once again commemorate Black History.

It is comforting to know that almighty God is a God for all people and for all times. I pray even now that God will be glorified, and He'll be seen in everything that is done here today. May the effects of my words on your hearts and minds be to His glory, in the mighty name of Jesus Christ. Amen.

Today my focus will be based on reflections that span from the general to the personal. Reflections that relate to when we are faced with injustices, losses, life reversals, pain and death, and there's a sense that we cannot find God, who is our hope, our Saviour and deliverer.

I will continue to use the first person plural, as I seek to have us move together as one for the next few minutes, because I believe, in some way, we all have experienced aspects of these negative situations personally, or vicariously, through the experiences of others. If you are unable to relate to any of these situations at this time, then I say to you, watch out, the experience shall come.

Job’s experiences came to mind, as I contemplated these painful situations, especially in light of all that is taking place in our world today.

Therefore, I've entitled my brief talk “When you can't find God, there is Hope, because He knows where you are”.

I shall reference Job 23, verses 1 to 10, but first we must take note that these verses are set against the backdrop of Job’s unbelievable losses that occurred in quick succession from loss of all his livestock, then all his children, to the loss of his very health. Leaving him in his grief covered in boils from the crown of his head to the soles of his feet. In Jamaican patois our descriptions can be quite interesting, and we would say “boils covered Job from head top to foot bottom, yes”.

Job 23 also comes against the backdrop of the comments of his friends who should have comforted him and instead did the opposite.

Now, in the field of social psychology there's a concept, called the Just World Phenomenon, which relates to the tendency to believe that the world is just and that people get what they deserve. Since there's a desire to justify that belief of our just, and fair world, individuals will look for ways to explain, or rationalize injustices, and how they do this, they often blame the person in the unjust situation, who is actually the victim. Therefore, if people are suffering, their suffering is based on consequences of their actions, or their poor choices. From a psychological perspective, it could be considered that this phenomenon might have been at work in the situation with Job's friends.

Now, with full respect for hermeneutics related to context and surrounding scriptures, I’ll read a brief portion of what one of Job’s three friends said to him in Chapter 22, verses 3 to 5. He said “What pleasure would it give the Almighty if you were righteous? What would he gain if your ways were blameless? Is it for your piety that he rebukes you and brings charges against you? Is not your wickedness great? Are not your sins endless?”

His friend was actually saying that his stress and suffering were punishment for his wickedness. At this point, it's important to note that Job chapter 1, verse 1 introduced him in the following way: In the land of Uz there lived a man whose name was Job. This man was blameless and upright; he feared God and shunned evil.

We therefore know that Job was a righteous man, and so it was wrong to conclude that his suffering was due to his sinful actions. Those of us who are familiar with Job’s story are aware that God allowed him to suffer for His purpose to be served. Unfortunately, we know the background behind Job’s suffering, but his friends did not.

It is possible, do you not think, that you or I would have judged him in a similar fashion? This is food for thought.
Now, we can examine our key verses in Job 23 from verses 1 to 9. We know Job’s response to his friends’ comments in pain and anguish, he said,

“Even today my complaint is bitter;
his hand[a] is heavy in spite of[b] my groaning.
3 If only I knew where to find him;
if only I could go to his dwelling!
4 I would state my case before him
and fill my mouth with arguments.
5 I would find out what he would answer me,
and consider what he would say to me.
6 Would he vigorously oppose me?
No, he would not press charges against me.
7 There the upright can establish their innocence before him,
and there I would be delivered forever from my judge.
8 “But if I go to the east, he is not there;
if I go to the west, I do not find him.
9 When he is at work in the north, I do not see him;
when he turns to the south, I catch no glimpse of him.

I shall pause there before going on to verse 10.

We know that Job responded here from the depths of his darkness where he could not find God. Can you relate directly or indirectly to this darkness, that seems to be devoid of God. Perhaps, many of us can relate in some way.

Throughout time, up until today, innocent people have suffered through no fault of their own. In our current times we know the suffering and victimization of the poor, the elderly, people with disabilities and black indigenous people of colour. Consider that these people, among whom many of us are numbered, might be looking for God, wondering where He is, and why He has not shown up for them. For us. They are struggling to make sense of the onslaught against them. We are struggling.

As we travel together on this journey, I wonder in what ways can you relate to this? Do you need help, and hope? Do you look for God and fail to find Him? Can you help those in need, and perhaps be the hand of God for them, to enable them to actually see God? Do you seek to educate yourself about the plight of others? Empathize? The plight that comes with the colour of their skin, their socio-economic status, or other features associated with their reality?
Do you wish to know? To change? To help? Are you willing to try? Because when you do, then God will be seen.

We, who are alive today, suffer in many ways, with job losses, loss of housing, dislocation and grief, we are affected personally, or we feel the pain of others, but there is One who brings hope.

As some circle the drain, as some lose all they have, as some say “the world is not just”. As some in frustration, and hopelessness, say “burn it all”. As some of us say “I can't breathe”.

Let me invite you to travel back in time with me to Jamaica, many years ago, as we move up into the personal.

It was a Saturday that was excitedly anticipated by many, as the graduates of Evangelism and Counselling training were preparing for commissioning that evening. As a member of the training team, I was thankful to God for the opportunity to be a part of such a wonderful occasion. I would not have deserved an introduction like the one Job received in Job Chapter 1 where he was described as blameless and upright. However, I was earnestly doing my best to serve God well.

As the morning dawned, I was struck with a severe illness that escalated throughout the day until I had to be rushed into emergency surgery. This is not the crux of the story. Rather, the fact is that something went terribly wrong during the surgery and resulted in severe health related consequences that assailed me for almost two years. As the illness ravaged my body, I constantly cried out to God for help and asked him to show me my faults, bring me healing.

Some fellow Christians were like Job's friends and they told me to confess to God, for I must have sinned to be suffering so greatly. I was too sick to be offended or defensive. I confessed because I believed they spoke the truth. I repented and confessed my sins and even confessed things that I was not sure were sinful but, just in case. I believe I would have confessed whatever was suggested to me at that time, to remove anything that might bring judgment upon me. I searched for God, but I could not find Him.

But… Thank God for the buts! Job 23 continues in verse 10 and following. “But He knows the way that I take. When He has tested me, I will come forth as gold”.

God knew where I was, and what was taking place in my ravaged body. This was evidenced in how my story ended. As you can see, I'm here with you. I was close to death, and I was ready for it. I had come to the end of myself in my pain ridden and frail body, after almost two years of suffering. I fully embraced the knowledge that being absent from this body meant being in the presence of almighty God.

Then, there was a breakthrough, which I summarize with the doctor’s words. They said, “Something was wrong, we couldn't fix it, but now she's okay, we don't really know what happened.” I shall leave you to decide whether this was a miracle, or just an event that was inexplicable to everyone, including the experts. From my perspective, I could not find God, but He was there. He was never gone on a journey.

In spite of guns that indiscriminately kill us all, black, white and brown. In spite of deadly weapons, including racism, and in particular anti-black racism that is rampant around us. In spite of the murder of George Floyd and other precious ones who did not deserve to die. You must look to God, we must look for God, and I say to you do not give up. There is hope, because what is important is not that you may not be able to see Him, or find Him. Rather, it is that He sees you. He knows the way that you take, and He will carry you through. So continue to hope in Him, for at the end of it all, if you endure in Him, you shall come forth as gold, in this life or the next.

May God grant us all the measure of faith and hope to steadfastly trust Him, because He loves us so.

Thank you. God bless you.