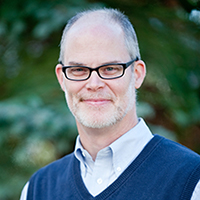 Dean George Sweetman speaks to our community about the Liturgy for Stations of the Cross. Community Chapel this week will spend time reflecting on Christ's movement toward the Cross. This week is Holy Week and through song, reflection, Scripture, and prayer, we invite the community into a prayful posture of gratitude.

This past Sunday, the Church began commemorating Holy Week 2021 with the celebration of Palm Sunday. For many of us, our churches sang Hosannas to mirror what the people of Jerusalem did over 2000 years ago to welcome Jesus in Jerusalem. They thought he was entering the city to initiate an earthly kingdom and set his people free from bondage and the enslavement of Roman authorities. But Jesus had something different in mind.

While we know Jesus’ mission was to inaugurate his father’s Kingdom and release the captives, offer salvation from sin, and freedom to all, his plan wasn’t what those who waved palm branches and set their cloaks on the road in front of him as he rode his foal were expecting.

Palm Sunday, while appearing triumphant, was the start of something very different.

Today we’re offering you a moment to breathe deeply, reflect responsively, and prayer quietly as you move through something called the Stations of the Cross in recognition that we are in midst of Holy Week — a moment in time when followers of Jesus around the world contemplate the sacrifice of God for the sake of his world. A time when we are reminded in a very powerful way that we are invited by Jesus to take up our cross and follow him.

For those of you who have visited the Chapel on the Tyndale campus, you’ll know that there are 14 remarkable bas-relief ivory sculptures embedded in the walls of the room. These 14 stations depict the movement of Christ from being condemned to death through to His crucifixion and being laid to rest in the tomb. Over the course of the next 30 minutes or so, we want you to consider some of these stations. As photos of stations appear on the screen, hear the words of Scripture wash over you, take some time in silence to attentively listen to God, and then to pray. After a period of time, the Tyndale Community Choir, Singers, or Band will offer a musical interlude that we hope will help you enter even more deeply into this holy pursuit.

The Stations of the Cross are almost as old as the church itself. They were developed to help pilgrims walk, in a representative way, the Via Delarosa or the Via Crucis (Way of the Cross) — just as Jesus did as he trod toward Golgotha.

Christians through the centuries and around the world have joined each other into entering into this solemn passage in solidarity with each other and with Jesus — to remember, to reflect, to reconsider.

Jesus tells us in his gospel “If any want to be my followers, let them deny themselves and take up their cross and follow me.” This was a non-negotiable for the disciples and those invited to follow Jesus 2000 years ago and the call remains for us. We are beckoned to take up our cross and follow Jesus on the way to the cross.

The Stations of the Cross trace Jesus’ path from Pilate’s house, to the Place of the Skull where Jesus would hang, and finally to his tomb.

You are about to “walk” the way of the cross. Millions of brothers and sisters have done the same through the ages. Reminded of Jesus’ last day, we join him in a pause from all that distracts us and pulls us away from recognizing both the sacrifice and the call on our lives.

Then Pilate took Jesus and had him flogged. The soldiers twisted together a crown of thorns and put it on his head. They clothed him in a purple robe and went up to him again and again, saying, “Hail, king of the Jews!” And they slapped him in the face. When Jesus came out wearing the crown of thorns and the purple robe, Pilate said to them, “Here is the man!”

When Pilate heard this, he brought Jesus out and sat down on the judge’s seat at a place known as the Stone Pavement. It was the day of Preparation of the Passover; it was about noon.

Here is your king,” Pilate said to the Jews.

“Shall I crucify your king?” Pilate asked.

“We have no king but Caesar,” the chief priests answered.

Finally Pilate handed him over to them to be crucified.

So the soldiers took charge of Jesus. Carrying his own cross, he went out to the place of the Skull (which in Aramaic is called Golgotha).

O Lord, may I be moved by this journey. It will be challenging and it will demand my all. May I make this journey with you and you with me. Do not leave me alone on this way, even though your own followers abandoned you at your hour of need. Lord Jesus, it is because of your cross that we are free. Amen.

As the soldiers led him away, they seized Simon from Cyrene, who was on his way in from the country, and put the cross on him and made him carry it behind Jesus.

“Come to me, all you who are weary and burdened, and I will give you rest. Take my yoke upon you and learn from me, for I am gentle and humble in heart, and you will find rest for your souls. For my yoke is easy and my burden is light.”

Surely he took up our pain, and bore our suffering, yet we considered him punished by God, stricken by him, and afflicted.

But he was pierced for our transgressions, he was crushed for our iniquities; the punishment that brought us peace was on him, and by his wounds we are healed.

We all, like sheep, have gone astray, each of us has turned to our own way; and the Lord has laid on him the iniquity of us all.

Prayer: King of the Universe, you tasted dirt, blood, and sweat as the heavy wood of the cross weighed down your body and the thorny crown punctured your head. I am again shocked by the weight of my own sin, and I am humbled that you would suffer such humiliation for me. While you bear the heaviness of the cross, give me the strength to step out in courage to do my part for your kingdom. Lord Jesus, it is because of your cross that we are free. Amen.

Two other men, both criminals, were also led out with him to be executed. When they came to the place called the Skull, they crucified him there, along with the criminals—one on his right, the other on his left. Jesus said, “Father, forgive them, for they do not know what they are doing.” And they divided up his clothes by casting lots. The people stood watching, and the rulers even sneered at him. They said, “He saved others; let him save himself if he is God’s Messiah, the Chosen One.” The soldiers also came up and mocked him. They offered him wine vinegar and said, “If you are the king of the Jews, save yourself.” There was a written notice above him, which read: This is the King of the Jews.

Yet it was the Lord’s will to crush him and cause him to suffer, and though the Lord makes his life an offering for sin, he will see his offspring and prolong his days, and the will of the Lord will prosper in his hand.

After he has suffered, he will see the light of life and be satisfied; by his knowledge my righteous servant will justify many, and he will bear their iniquities.

Therefore I will give him a portion among the great, and he will divide the spoils with the strong, because he poured out his life unto death, and was numbered with the transgressors.
For he bore the sin of many, and made intercession for the transgressors.

Lord Jesus, you withstood the burden of the cross, my sin, my mocking and my derision heaped upon you. And you did so with grace and dignity. In the face of evil, you offered only love. In sorrow, you gave hope. May I too, stand with courage when all is stripped from me. Lord Jesus, it is because of your cross that we are free. Amen.

It was now about noon, and darkness came over the whole land until three in the afternoon, for the sun stopped shining. And the curtain of the temple was torn in two. Jesus called out with a loud voice, “Father, into your hands I commit my spirit.” When he had said this, he breathed his last.

Now there was a man named Joseph, a member of the Council, a good and upright man, who had not consented to their decision and action. He came from the Judean town of Arimathea, and he himself was waiting for the kingdom of God. Going to Pilate, he asked for Jesus’ body. Then he took it down, wrapped it in linen cloth and placed it in a tomb cut in the rock, one in which no one had yet been laid. It was Preparation Day, and the Sabbath was about to begin.
The women who had come with Jesus from Galilee followed Joseph and saw the tomb and how his body was laid in it. Then they went home and prepared spices and perfumes. But they rested on the Sabbath in obedience to the commandment.

O Jesus, you are nailed to an ugly symbol of death on a tree. You did this for me, for us, for the world. You, without sin, died for sinners. You hanged in our place. Give me the trust, O Christ, that your plans are higher than mine. For even when all seems lost, you’re still at work. Death is not the final word for you. Lord Jesus, it is because of your cross that we are free. Amen.

Maybe He looked indeed
much as Rembrandt envisioned Him
in those small heads that seem in fact
portraits of more than a model.
A dark, still young, very intelligent face,
A soul-mirror gaze of deep understanding, unjudging.
That face, in extremis, would have clenched its teeth
In a grimace not shown in even the great crucifixions.
The burden of humanness (I begin to see) exacted from Him
That He taste also the humiliation of dread,
cold sweat of wanting to let the whole thing go,
like any mortal hero out of his depth,
like anyone who has taken herself back.
The painters, even the greatest, don’t show how,
in the midnight Garden,
or staggering uphill under the weight of the Cross,
He went through with even the human longing
to simply cease, to not be.
Not torture of body,
not the hideous betrayals humans commit
nor the faithless weakness of friends, and surely
not the anticipation of death (not then, in agony’s grip)
was Incarnation’s heaviest weight,
but this sickened desire to renege,
to step back from what He, Who was God,
had promised Himself, and had entered
time and flesh to enact.
Sublime acceptance, to be absolute, had to have welled
up from those depths where purpose
Drifted for mortal moments.

Go in solemn peace. And may God be with you.