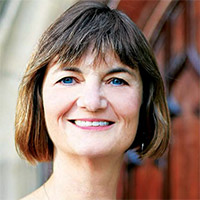 The Rev. Dr. Joan DeVries, Assistant Professor of Worship Arts at Trinity Western University in Langley, BC, will be sharing her reflections on a Psalm that inspires her with a message entitled “Psalm 1: The Pursuit of Happiness”.

Joan is a long-time friend of Tyndale having served in a couple of positions in Student Development including Dean of Students (Seminary) before her move to BC. She is an ordained pastor in the Christian Reformed Church and has served several congregations in Ontario as Senior Pastor before completing her PhD at McMaster Divinity College. She and her husband Frank are parents to three married children and adoring grandparents to three grandchildren.

Today we’re going to be reflecting together on Psalm 1. I don’t know where you’re at in your life right now, but Psalms always seem to be appropriate to various circumstances of life. Psalm 1 is of course, right at the beginning. The first one. It signals the beginning of a journey, of choices along the way.
If you have ever been to Europe, one of the things that strikes you is the churches. Many of them are old; and they are huge. They are high and impressive. Often they have these gigantic doors. As you pull the grand door open you know that you are entering a different kind of place. A certain kind of space.

Psalm One is like that. It is the very first psalm or song or prayer in the whole book of 150. It has a very specific place in the order. It’s the huge door that you pull open. Its tone, its content, orients you to the rest of the book. Psalm one is the threshold, the entranceway. Come enter with me…..

Blessed is the one who does not walk  in step with the wicked
or stand in the way that sinners take
or sit in the company of mockers,
but whose delight is in the law of the Lord,
and who meditates on God’s law day and night.
That person is like a tree planted by streams of water,
which yields its fruit in season
and whose leaf does not wither— whatever they do prospers.
Not so the wicked!
They are like chaff that the wind blows away.
Therefore the wicked will not stand in the judgment,
nor sinners in the assembly of the righteous.
For the Lord watches over the way of the righteous,
but the way of the wicked leads to destruction.
This is the Word of the Lord

Blessed are those who (1)

Look at how the psalm starts. Blessed are those who….That’s a formula that is familiar to Bible readers. Jesus used that phrase too in his famous Beatitudes. And so, to start off the whole book of psalms, we have a statement of blessing, a Beatitude. The psalm gives the picture of the person who is living in a state of blessedness- a state of happiness, joy, deep contentment. It’s as if an outside observer sees this person and exclaims:

Oh, the happiness of the person who…. Lives this way. Isn’t that wonderful to see? Look how rich and full and content their lives are…..

In fact, other translations say…

How do you end up in this state of happiness? Well there are points that this psalm outlines. Stephen Covey wrote a famous book called The Seven Habits of Highly Effective People. Covey notes HABITS of these kind of people. Inclinations they have. Choices they make, maybe deliberately at first, training themselves. But then these became habits—routine ways of doing things. Natural responses to situations. That is what this psalm is like, too. It lists the 4 or 5 habits of highly blessed or happy people.

The first clues are negative, in the sense that they are things these people AVOID. If you are seeking a full, happy life, you need to drop certain habits. You could summarize these under the term:

DON’T FOLLOW THE CROWD (1)
do NOT walk in step with the wicked or stand in the way that sinners take
or sit in the company of mockers,

Who is the CROWD—well in brief it’s those who don’t live God’s way. Those who say- I can make my own destiny. I can make my own choices. I can live the American dream of having it all. For example one famous man said that:

“The American dream is reaching a point in life where you don’t have to do anything you don’t want to do.”

So it’s definitely a way of life that doesn’t put God’s desires at the centre.

There are three actions here in verse 1 (walk, stand, sit) and three groups of people (wicked, the sinners, the mockers). Although there are differences between them, it is also a total picture. Repeated for emphasis. But there is progression. The progression of temptation, of sin.

First of all these people “do not walk in step with the wicked.” In other words they don’t go along with the crowd. The beginning may be innocent enough. You come across something by accident maybe. A great bit of juicy information about someone. Or an insider trading tip. Or your friend offers you something at a party: Have you ever tried this? You think, “Oh, maybe I’ll just see what all this fuss is about. How bad is this stuff really?” And you begin to travel along that road WITH the crowd. Instead of continuing in God’s way you get diverted. Just to see.

You know the temptation that Eve faced was to KNOW more. But in this broken world, knowing more is not necessarily the way of wisdom.

The next step is that they “stand in the way sinners take” or they begin to hang out where the crowd hangs out. Now you don’t just travel along a little ways by accident, you begin to spend more time there: with the gossip, or the drugs, or the illicit information, or the pornography. When confronted with a choice, by nature we’ll take the path of least resistance. But the blessed, happy person will make a choice: the RIGHT path, not necessarily the easy road.

C) Or sit in the company of mockers, [Don’t make their habits your habits]

In this progression finally you are then “sitting in the company of mockers.” Their way of life becomes yours. You become one of them. Their habits are your habits. Their way of viewing life is YOUR way of viewing life. You, too become a mocker of the righteous, of those who try to live by other principles. They can’t let loose, you scoff. They don’t know how to have fun! They are not free! No, but are you? The Bible says you just trade one kind of bondage for another one. Instead of choosing to do things God’s way, you become hooked on your own pleasure. You become a slave to your own desires. Which are also the ones that the ungodly CROWD approves of. God’s Word says that’s not freedom at all. It is an illusion. A mirage. It will make you like chaff that the wind blows away. Rather than being control of your own destiny, you become a nothing, blown around by whatever whim is blowing that day.

Three Habits of highly Blessed People involve avoiding the self-talk, the attitudes and the habits of the Crowd. People who make choices that lead away from God. To live the happy life, there are things you should NOT do.

And here is what you must DO

BUT DEVELOP A ONE TRACK MIND (2)
but who delight in the law of the LORD and meditate on God’s law day and night.

Fully happy people have a one track mind about doing what God’s wants. They know the difference between right and wrong. And they have developed the habit of making wise choices. Maybe the choices were hard at first. They took effort.

But over time they have become a habit, a reflex. To make choices that lead to life and not death.

Where do we find the ability to do that? By meditating on God’s law. By delighting in God’s instruction. Hanging out with God’s people. Getting ourselves into a small group. Opening ourselves up to the leading of God’s Spirit. Seeking God’s direction. Looking to Jesus as an example. Meditating on God’s law—allowing it to shape our thoughts—gives us the strength to live according to its principles.

And then the psalm gives us this amazing imagery about what such blessed people are like.

AND LIVE A FULL, HAPPY LIFE (3, 6)
They are like a tree planted by streams of water,
which yields its fruit in season
and whose leaf does not wither—
whatever they do prospers.
For the LORD watches over the way of the righteous,
but the way of the wicked will be destroyed.

This godly person is a tree. Planted there. Not some wild seed that began to take root. But deliberately planted by the irrigation canals. And although he hasn’t been mentioned yet, it is God who does the planting. God who assures that such people thrive. They are images of people thriving. Imagine a climate where there are few trees. It is dry, rocky, dusty. Trees are scarce. Greenery can only grow by water. God is the water; his people, who live near him, are green. This image is used more often in Scripture.

But blessed are those who trust in the Lord and have made the Lord their hope and confidence. They are like trees planted along a riverbank, with roots that reach deep into the water. Such trees are not bothered by the heat or worried by long months of drought. Their leaves stay green, and they go right on producing delicious fruit. Jeremiah 17:7,8

Trees that are firmly and deeply rooted in God, are not troubled when the heat or drought happen. They are not easily swayed. Not easily shaken. When they encounter trouble or adversity, or persecution, or unrest, or disaster, even, there is something unshakeable about them. Because their confidence does not depend on themselves. Or how well they do or don’t do. It doesn’t even depend on what others think about them, rightly or wrongly. Because their roots go deep, deep down into the water. God’s living water. And they can always draw strength from God. Their well being does not depend on circumstance. It depends on God. And God is faithful. God is true. A Mighty fortress is our God.

I desire to be that kind of person, don’t you? Unshakeable. Firm in conviction. Not of my own goodness. Not at all. But that in my own weakness is God’s strength. I certainly desire for this to be that kind of church too. Firm through adversity. Not because we are so good, or do it so right, or have all the correct answers, but because we have deep, deep roots that draw water from God even in times of trouble.

No wonder that Jesus, on his way with the disciples to Jerusalem to be lifted up exclaimed: Happy are those who hear the word of God and keep it. (Luke 11.28).