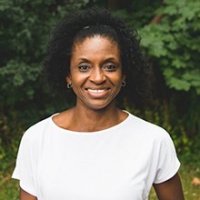 We continue our weekly Community Chapel “Summer Series” podcast with a reflection on Psalm 99 by Charmain Brown, Adjunct Professor of Education at Tyndale. Her message is entitled “What My Grandmother Taught Me”.

Charmain is a dedicated educator with twenty-five years of teaching and leadership experience with the York Region District School Board with an extensive background in curriculum, instruction, equity, and inclusion. Charmain has written numerous publications and resources focused on various equity issues including Possibilities: Addressing Poverty in Elementary Schools and the e-text 365: Black Canadian Curriculum. She also has experience as a Curriculum Consultant, Regional Instructional Leader, Coordinator and Instructor with the Ontario Institute for Studies in Education at the University of Toronto (OISE/UT) in the Elementary Pre-service program and is currently a Seconded Faculty Member at York University along with her work at Tyndale. Along with a love for teaching, learning, and instruction, she also enjoys staying active and spending time with her family - her husband and two young adult children.

Hi, my name is Charmain Brown. I'm an adjunct professor in the Bachelor of Education Program at Tyndale. I appreciate the opportunity to share a Psalm that has a very personal, as well as spiritual, connection to who I am. I invite you to enter into this time with an open heart and mind, willing to connect, learn and reflect.

I am blessed to be a descendant of many strong, brave, resilient women, with five aunts on my mother's side, and seven aunts on my father's side that I grew up admiring and learning from. There is, of course, my mother who has always shown me how to carry myself as an unapologetic woman of God, that is independent, empathetic and loves to serve. Though I have countless anecdotes of what I have learned from these phenomenal women, my paternal grandmother is the one who gifted Psalms 99 to me, and has added to my life's mosaic. Marian Barton was a beautiful woman that seemed to stand taller than her five foot five frame. She was born and raised in Barbados, where she diligently worked in the home of one of the most prominent families that profited from colonialization just as her mother did before her. She was actually a product of the many atrocities that her mother faced, when enslaved to this family, an experience she also faced herself producing her first child. She spent more time cooking, cleaning and raising the children of this family, than she could for her own, forcing them to raise themselves. Love was never absent. You wanted to be around her, because she was always welcoming, and had the best Bajan delicacies available when you would visit her, such as sweetbread, flying fish and Cou-Cou, which is a filling meal made out of cornmeal. Oh how she loved to eat. She loved a good buffet, lining her purse with foil to take some home with her, even after eating portions that would rival a weightlifter when they were bulking up. I later learned that food was scarce when she grew up, so the abundance at a at a buffet was a perfect opportunity to ensure food for leaner times. Her skin was fair, and her hair was wavy, always coiffed the same way, to accommodate her pillbox hat that she loved to wear. That was a must when going to church or revival meetings, a hat. Different ones for different outfits. She also was an avid reader. I would always gravitate to her bookshelf and go through the countless books on faith, prayer, reverence and service. All her books were on how to grow, build, develop her relationship with Christ, so that she could serve her family, her neighbourhood and her church.

I was in my late 20s when she was in her last years. I remember her asking me to read Psalm 99 to her. I was honoured because she had never asked me to do anything like that before. As I got her large print Bible, I was assuming it would be one of the more popular Psalms. The Lord is my shepherd, I shall not want. Psalm 23. Delight yourself in the Lord and He will give you the desires of your heart. Psalm 37. Make a joyful noise onto the Lord. Psalm 100. I found the chapter and read in my best readers voice.

Psalm 99. The Lord reigns, let the nations tremble. He sits enthroned between the cherubim. Let the earth shake. Great is the Lord in Zion. He's exalted over all the nations. Let them praise your great and awesome name. He is Holy. The King is mighty, He loves justice. You have established equity in Jacob, you have done what is just and right. Exalt the LORD our God and worship at his footstool. He is Holy. Moses and Aaron were among his priests. Samuel was among those who called on His name. They called on the Lord and He answered them, He spoke to them from the pillar of cloud. They kept his statutes and the decrees He gave them. Lord our God, you answered them. You were to Israel, a forgiving God, though you punish their misdeeds. Exalt the LORD our God and worship at his Holy mountain, for the Lord our God is holy.

When I concluded, she said a shaky but strong, "amen", and thanked me. It wasn't until after she passed away that I questioned why she chose that Psalm for me to read. She never quoted it, or referenced it before, as she had with other verses in the Bible. Why that Psalm? Why at this time? Why me? With deeper reflection and some research, I realized that this Psalm is a call to worship, acknowledging the Lord's greatness, His justice, and his forgiveness. Verses two and three reminds us that the Lord is All in all, he's our leader, he's our Saviour, he should be high and lifted up in the church and in our lives. His greatness should be praised because He is Holy. This is a reminder, a statement, but it is also what we should stand on in terms of our faith, how we navigate life, how we make decisions, how we interact. His name is great, and he is an awesome God. Verse four, and five states that the Lord loves justice, He values equity. In this day and time we demand justice, we expect accountability. We protest and chant, post statements, memes and tweets. But His justice is not like the Justice we experience or strive for on Earth, which many times is flawed, questionable and challenged. The Lord's strength is rooted in being a just King. His justice ensures equity, because His desire is to love us and ensure the best for us. This is why the psalmist states that we need to exalt Him, worship Him because of the loving authority He has. Verses eight and nine states the Lord is our God. Even with the authority He has as King, and how unworthy we are to receive it, he is our God, a forgiving God. Though we go against his will, and challenge who he is in our words and deeds, He forgives us and still blesses us for His greatness, His justice and his forgiveness. We are told in verse nine to exalt and worship Him because He is holy. It is also a reminder of what we should do for others who may have harmed us. Forgive them.

My grandmother lived this Psalm, she understood the message and the power of it. She understood the greatness of God, living and overcoming so much in her life. Only a great God would bring her through that. She understood that God was a just God. He would need to be, in order to allow her to own land and a home in Barbados that remains in our family today, in a time when colonialism and the oppression attached to it disallowed this for most black citizens. Only a just God would allow her to create that legacy for her children, grandchildren and great grandchildren. She understood that our God is a forgiving God. We do wrong, say things that are wrong, cause harm in intentional and unintentional ways. But despite this, He loves us so much that he extends forgiveness freely if we ask for it. She extended forgiveness to others just as Christ extended it to her. We should do the same.

I thank my grandmother for gifting me this Psalm, for instilling in me a love of the Word, the love of service, and consistently exalting and worshiping the Lord because He is Holy. May we all stand tall, knowing that we worship a great God. Thank you so much for allowing me to share my heart today. Continued Blessings to you and yours. Walk good.