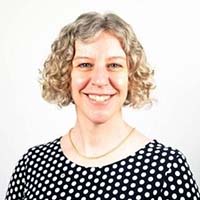 In our final chapel summer series of reflections in the Book of Proverbs, Dr. Beth Green invites us to consider what kind of person we are – to fear Yahweh deeply and with more courage. Today's passage is in Proverbs chapter 1 from verses 1 to 7.

Dr. Green continues her work on current projects, providing Christian educators with commentary on dominant themes in contemporary education. Along with her duties at Tyndale, she regularly publishes her research in international journals, including the British Journal of Sociology and Education and the Cambridge Journal of Education.

Do you have ‘sayings’ in your family, or your culture or perhaps specific to your language? In my family my Grandmother was famous for her ‘sayings’. If she had eaten enough she would say ‘I’m full up to my brooch’. She often wore a brooch pinned to the collar of her blouse. If she found a word or a name too difficult to pronounce for example supercalifragilisticexpialidocious or antidisestablishmentarianism she would say ‘ah yes, and he used to chew bread for our ducks’. Perhaps the strangest one was when she ordered a cup of tea: ‘I’ll have a Charlie Abrams’ please. In all fairness she’s not the origin of that phrase, I think it was actually a family friend. But if you order a Charlie Abrams in our family, it means that you want half a cup of tea. The origins of this strange expression lie in chapel life. Charlie Abrams was the rather austere Sunday School Superintendent of Salem chapel in Bedminster, Bristol, England. He’s way before my time and so I cannot vouch for whether this tale is the stuff of legend or fact but he was reputed to be rather mean and when he poured out a cup of tea, they tended to be half empty - I suspect that a cup half empty may also have reflected his outlook on life too but anyway if you want half a cup of tea you had to ask my Grandmother for a ‘Charlie Abrams”.

Sayings like this only make sense if you know the story, if you are plugged in to the context. A proverb is a wise saying, but some of the wisdom may be lost on us if we don’t know the context into which it was first spoken, the oral tradition within which it communicates weighty truths. Sometimes sayings are the fragments we have left of ancient cultures or fragile languages rarely spoken. The story-tellers, the people who pass on the proverbs are often members of an older generation, the wise ones, easily looked over - but what is lost if we don’t take the time to seek out their story?

The book of proverbs is like this, it should not be read alone. It should be read alongside the other wisdom literature of our Old Testament cannon like the story of Job, or the cries of the prophets and the reflection of books like Ecclesiastes. We should remember that the sayings gathered are a treasure trove of North Africa and the near East as people found ways to chart life’s journey between pathways of wisdom and folly, fruitfulness and laziness, purpose and meaninglessness and, life and death.

I am going to read the prologue to Proverbs,

We don’t know whether these verses were original or added later, it does not really matter. I often write my introductions last. The prologue tells us what this collection of saying is for. Here is something important to remember, Proverbs is not a term paper, a poetry book or a textbook - it is a collection, much of which started out as spoken word. So there are poems in the book of Proverbs, two big ones in chapter 1: 20 - 33 and chapter 8: 1 - 36 for example. Some commentators identify ten lessons written from parent to child, accounting for about 50% of the material. There are mottos and metaphors some of which would make great bumper stickers and others take a bit more pondering.

The prologue tells us how this collection hangs together for a wandering community seeking to live well in obedience to their God and in harmony with God’s creation. Just like you would need to know my Grandmother or the Salem Chapel Sunday School Superintendent to make sense of the saying a ‘Charlie Abrams’; to make sense of Proverbs requires some knowledge of Yahweh Israel’s God. Fear of the Lord is the beginning of wisdom - says verse 7. That is the most important motto of Proverbs and it permeates the rest of the Biblical cannon. There are echoes of this profound and relational truth throughout all of scripture.

The prologue invites us to consider what kind of person we are. That’s a little different from inviting us to choose what kind of person we would like to be. Let me explain what I mean. A major theme throughout the whole collection of sayings is the absolute contrast between being wise and foolish, between being righteous or wicked, between fearing Yahweh and not fearing Yahweh. Proverbs rests on an assumption: that those who attain wisdom and discipline, those with a prudent and disciplined life, those who do what is right and fair fear Yahweh.

A side note on the word fear here, it is used in the Bible to mean trembling from head to toe and being deeply troubled. That’s mostly how we use it in English. It is also used to communicate a sense of awe and wonder and of being in the presence of something so beautiful, true and outside of our experience that we must take our shoes off, bow down and, recognise that we are the creature and Yahweh is the creator. That’s very different from the way we typically use the word in English. Fearing Yahweh is not about being beaten and manipulated into submission by something that terrifies you. Fearing Yahweh is being known, finally knowing who you are, what the meaning of creation and life is, placing yourself into the presence of God where there is freedom and purpose.

Proverbs makes use of the image of a parent teaching a child, or a mentor speaking out of their own experience to express how this relationship of entering into wisdom works. This is how you grow to be like the creator you ‘fear’. This knowledge is for the beginner and for those who are already wise. Verse 4 invites the young to get knowledge and discretion and, verse 6 calls the wise to add to their learning.  Fearing Yahweh is a quest, it never stops, you never arrive, and it deepens and grows. You don’t get a diploma one day and graduate, ‘this person is now wise’. Wisdom is formed in the context of living out life practically looking for guidance that will enable you to keep fearing Yahweh.

Proverbs is a child of its historical time. In case it annoyed you a bit that only fathers and sons are talked about in chapter one, note that wisdom is personified throughout the sayings as a woman. A woman who speaks publicly in the style of the prophets who calls the people, rulers, nations to account. When wisdom speaks she asks us as individuals, culture and society to consider our actions, are they consistent with those who fear Yahweh?

Proverbs is not a self-help manual, it’s not a 30 day app or a podcast to train you to speak a new language or develop mindfulness. It isn’t on the app store along with lots of different versions from different content creators from which you choose the one that fits your lifestyle brand best. Proverbs is a collection of sayings, some from earlier times, some from later times - mixed in together. Someone thought it was really important to collect these sayings together, get them on a scroll, Why? Because fear of Yahweh isn’t a lifestyle choice. It isn’t okay to be a little bit wicked at times if no one gets hurt, morality isn’t just a leftover of stuffy old Victorians designed to prevent us from having fun. Fear of Yahweh is freedom, freedom to be who you were created to be. Proverbs tells us there is not the option to live without purpose. To follow no-one is not to be without purpose. Fear Yahweh and be wise or fear no-one and everyone and be foolish.

This is why Proverbs invites us to consider what kind of person we are. Proverbs probes, provokes, puzzles us into fearing Yahweh more deeply and with more courage. I often find myself wishing I had written down more of my Grandmother’s sayings. But I am fortunate that I have the memories of living life with her and I often know what she would do in a given situation. Proverbs is a kind of memory book, we meet in these sayings the wisdom of Yahweh, and we bump up against what the wise would do in particular situations. As one scholar puts it ‘fear of the Lord’ was Israel’s most special possession. Will you make it yours?’