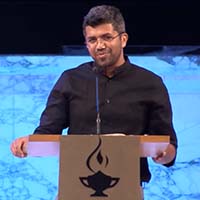 Before the start of the traditional academic year, Zachariah Chandy invites us to meditate in Psalm chapter 27 verse 4. He unfolds the most important plea – to dwell in the house of the Lord all the days of our life, to gaze upon the beauty of the Lord and to inquire in his temple.

Zachariah Chandy is a Registration Support Specialist at Tyndale University.

Good morning. Thank you, Dan, for leading us in worship, and to Brent for the introduction. I would also like to thank the staff association for extending this invitation for me to speak this Tuesday morning. As you might have inferred from Brent's introduction, I love the Old Testament and the ancient languages. I think I've taken probably all the Old Testament courses that Tyndale has to offer right now.

And so, the passage that I have chosen for our meditation today is again, one of my favourites. It's the fourth verse of the 27 Psalm, and it reads as follows. One thing have I asked of the Lord, that will I seek after, that I may dwell in the house of the Lord, all the days of my life, to gaze upon the beauty of the Lord, and to inquire in His temple?

Let us pray. Father, we thank You for Your Word, because it's a lamp to our feet, and a light to our path. We pray that you will enable us to hide your Word in our hearts so that we may not sin against you. And so Master, may the words of my mouth, and the meditation of our hearts, be acceptable in your sight. Amen.

It's always good for us to examine our prayer life. For I think it often indicates the condition of our hearts. We give thanks when we receive God's blessings. We cry out to God for deliverance during difficult circumstances. But I would like to suggest, that for the believer, the single most important plea that we can ever utter before God, can be found in this particular verse. It's threefold. One, to dwell on the house of the Lord all the days of our life, to gaze upon the beauty of the Lord, and to inquire in His temple. Before we dive in, it is helpful for us to recognize that the circumstances under which David prayed this, was not the most favourable. In the preceding verse, of this very Psalm, David says, "though an army encamp against me, my heart shall not fear. Though war rise against me, yet, I will be confident." The key question here is the basis or the source of David's confidence. What do you think? Was it in his superior sportsmanship? Or perhaps it was the mighty men of war that he rode to battle with? No, David's confidence remained in the Lord, who was his light and his salvation. From his prayers and his desires, we can see that David's perspective transcended his current circumstances, whether it be war, or it was good times. Whether good or bad, it provided a divine, or a heavenly, frame of mind that affected his prayers and his request to God. How then, is this relevant to us today? Or is it at all? Based on the above three points, I would like to suggest three ways in which it is relevant. The first point is that it's important for us to recognize that, as Christians, our home is in heaven, not on the earth. As Paul wrote in Philippians, three and verse 20, "but our citizenship is in heaven, and from it, we await a Saviour, Lord Jesus Christ." Now, when I came to Toronto from India, almost four years ago, to study here at Tyndale, I quickly realized that the most expensive commodity in this city is a house. And right now, we probably have a whole generation who may be priced out of the housing market. But praise God that is not so in heaven. In John 14 verses two and three, Jesus said, In my Father's house, there are many rooms. If it were not so, would I have told you that I go to prepare a place for you. And if I go to prepare a place for you, I will come again, and we'll take you to myself, that where I am, you may be also. One commentator writes, and I quote, "The House of anyone is where he dwells. And so the house of God is where God dwells." End quote.

For many of, all of us gathered here, a house is a place of refuge. A safe space, a space where one can rest and recuperate. Where warm food and hearty conversations lead us to believe that this is where we belong. But dear friends, where do we find refuge, in whom do we find refuge? At times, David found his home in this palace. Other times it was in a cave. I think perhaps David recognized what Paul wrote in Philippians, four and verse 12. "I know how to be brought low. And I know how to abound. In any and every circumstance, I have learned the secret of facing plenty and hunger, abundance and need. I can do all things through Him who strengthens me." David ultimately recognized that his refuge could not be found in anyone else, or anything else, except God. But how did David develop this confidence? I think, I would suggest that, this is this my second point, that David did so by gazing upon the beauty of the Lord. The Hebrew word for gaze, Kazaa, occurs about 50 times in the Old Testament, and it refers to an act of perception in some sense. It's not just limited to noticing things in passing, as we would notice traffic by driving down the 401. Rather, it's how maybe an apprentice, would look at a master tradesmen as he works, seeking to gather as much information as possible, or perhaps how an artist would look at a beautiful landscape to capture as many details as possible. But note what David's eyes are fixated upon. The Hebrew word again for beauty is "noam", and David's eyes are fixated on "noam" of the Lord. When we think of beauty, too often we ascribe beauty to just one's physical characteristics. But the word "noam" here refers to one's pleasant or favourable nature. This would be similar to the psalmist crying out in Psalm 90 to let the "noam" or the favour of the Lord, rest upon us to establish the work of our hands. Or how the ways of wisdom are described as the ways of "noam", or ways of pleasantness in Proverbs three and verse 17. Even as we think through David, or with David, what aspect of God's beauty might David be longing to gaze at, or ponder upon? I think that it is too many to consider. And I suppose we can we can agree with John that the world itself could not contain the books that will be written to describe God's "noam". Perhaps he thought of how the Spirit of God rushed upon him when he was anointed by Samuel, that enable him to do great and mighty things for God. Or perhaps David considered the holy justice of God, when his first son was put to death, due to a sexual sin with Bathsheba. I think what was foremost on David's heart was God's covenant faithfulness. Consider David's words from Second Samuel verse chapter 23, and verse five. As he lay on his deathbed, he said, "For does not my house stand so with God, for he has made with me an everlasting covenant, ordered and all things secure, for will he not cause to prosper all my health, and my desire." David's trust did not lie so much on the covenant, as much as the one who made the Covenant, the faithful one, Yahweh. And when God covenant is to build David's house, and established David's head on the throne, you see the fulfillment of it, made complete and perfect, on the cross of Jesus Christ.

So friends today, as we sit here in this chapel, can we think of gazing upon anything more beautiful, than the cross of Jesus Christ? Can we describe love in any greater fashion, than God sending His only begotten Son, to take on mortal flesh, to be pierced for our iniquities, to be crushed for our sins, so that those who believe in Him, may receive eternal life as sons of God. To gaze upon the beauty of the Lord is to gaze upon the cross of Jesus Christ, because that is where we see God fully manifested. Martin Luther, in the Heidelberg disputation, wrote the person deserves to be called a theologian understands the visible and the backside of God, as seen through suffering, and the cross.

My third and final point here is David's petition involving, inquiring of God in His temple. The temple as we all know, central to Israel's worship, was a consecrated location, where God's holy presence was most keenly felt. The young boy Samuel heard God's voice in the temple. Mary and Joseph took Jesus to the temple to be consecrated as an infant. So it's not surprising that David felt the need to remain and inquire of God in this Holy place. However, today, you don't need to travel to a holy location to seek God. We have His Word fully revealed to us in a language in which you can understand. In Psalm one, the Psalmist describes the blessed person, as one who meditates from the Torah, or the law of the Lord, day and night. Also the 119 Psalm, the Psalmist says, I have hidden your word in my heart, that I may not sinned against you. And he also says, and take not the word of truth utterly out of my mouth, for my hope is in your rules.

Let me conclude. Qohelet, the preacher in Ecclesiastes, rightly pointed out that there is a season for everything, times of joy and grief, seasons of sunshine, and seasons of rain. And this is true of all our lives, isn't it? both personally and communally. But friends, let us be encouraged and hopeful. Not upon a bank account, or the inflation rate, the rises or dips, or numbers in a spreadsheet, or graphs that go up and down. Let us be hopeful in Jesus Christ. Lets fix our eyes on the cross and seek comfort in His Word. So that we can gain a perspective, like David did, that transcended his immediate circumstances. Then we, I quote the hymn writer, "Come we that love the Lord and let our joys be known. Join in a song with sweet accord and thus around the throne. We're marching to Zion, beautiful, beautiful Zion, we're marching upward to Zion, the beautiful city of God."