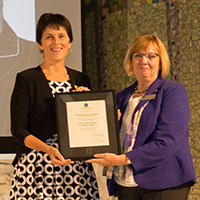 Darlene McLean-Albrecht [MTS 1997] took on the role of Executive Director of the Christian Embassy of Canada in May 2012 after serving as the Deputy Directly for six years. Christian Embassy seeks to inspire and connect Members of Parliament, Senators, Ambassadors, Diplomats and business leaders in order to help them better achieve their mandates, and to resource them as leaders. In December 2012, Darlene was awarded with the Queen’s Diamond Jubilee Medal for her work with Christian Embassy. Subsequent to her university education, Darlene taught and initiated French Immersion programs for schools across Ontario and New Brunswick. She has worked with university students to develop their leadership skills at both the University of British Columbia and at Université de Sherbrooke. During those years, she led student projects to Peru, Senegal, and Guadeloupe. She has lived and travelled across the globe and also taught French at an international school in Manila, Philippines. She and her husband, Harold Albrecht, the Member of Parliament of Kitchener-Conestoga, reside in Kitchener and Ottawa, Ontario.