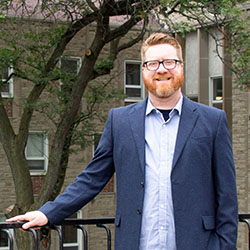 Congratulations to Dr. Cyril Guerette, Assistant Professor at Tyndale University College, on receiving the award for Best Rap Song of the Year at the 40th Annual Covenant Awards. This event was hosted by the Gospel Music Association of Canada (GMAC) earlier this year. The GMAC is a non-profit organization that aims to promote Christian music and has been holding the annual Covenant Awards since 1974. Dr. Guerette collaborated with Canadian artist and Juno award nominee, Drew Brown, on a song entitled Good Friday (Seven Last Words). Their song was also nominated for the Best Collaboration of the Year.

Dr. Guerette has been involved in making music since his first band, The Chevrons, in 1995. He was nominated in 2005 for the Covenant awards in the Best Hip Hop/Rap category for his first album.

With the rap name “Ill Seer,” the content of his recent collaboration reflects the message and mission of his music. “Part of my job is to see the ill in the world and speak frankly to it. A lot of my music is speaking to darkness in the world,” he says. In his music, he is able to observe the church, the artistic world and the academic world come together. Dr. Guerette often incorporates this passion into his teaching as a pastor and as a professor at Tyndale.  He recently shared his latest project, the Book of Habakkuk spoken in rhyme, with his hermeneutics class.

Dr. Guerette felt drawn to Tyndale’s multi-denominational outlook and its openness to explore different areas of interest, including his interest in hip hop, as well as its commitment to quality education while honouring God. His integrated passion for learning about God intellectually and practically is what he hopes to impart to his students, not only through teaching but also through poetry and rap in theology.

He believes that the rap genre has the capacity to speak about several issues and also remarks, “Hip hop is one of the most influential forms of music, and so the church as a whole needs to, at the very least, talk about it, if not try to embrace it and utilize it.”

Dr. Guerette’s first solo and freestyle prayer albums can be found at Illseer.com and the award-winning song in the album The Bright Sadness at bandcamp.com.