The Tyndale community celebrates four members of the University College faculty on their recent book publications. Each title noted has a brief description from the publisher and is available from the Tyndale Bookstore.

Interpreting Scripture with the Great Tradition: Recovering the Genius of Premodern Exegesis by Dr. Craig Carter, Professor of Theology. Published by Baker Academic. 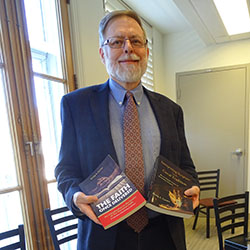 Interpreting Scripture with the Great Tradition will be useful in hermeneutics, biblical interpretation, and theology courses.

The Faith Once Delivered: An Introduction to the Basics of the Christian Faith by Dr. Craig Carter, Professor of Theology. Published by Joshua Press.

This practical book introduces the reader to the basics of the Christian faith through an explanation of the Westney Catechism. It grounds Christians in the essentials of the faith, examining the Great Commandment, the Apostles’ Creed, the Ten Commandments, Baptism, the Lord’s Supper, the Lord’s Prayer and the Great Commission. This is a useful book for small group studies, Christian schools, Sunday School, family devotions or simply as an introduction to the foundational doctrines of Christianity.

America's Failing Economy and the Rise of Ronald Reagan by Dr. Eric Crouse, Professor of History and Global Studies. Published by Palgrave Macmillan. 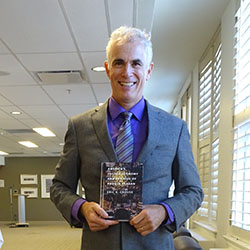 This book examines one of the most important economic outcomes in American history—the breakdown of the Keynesian Revolution. Drawing on economic literature, the memoirs of economists and politicians, and the popular press, Eric Crouse examines how economic decline in the 1970s precipitated a political revolution. Keynesian thought flourished through the presidencies of Lyndon B. Johnson, Richard Nixon, and Gerald Ford, until stagflation devastated American workers and Jimmy Carter’s economic policies faltered, setting the stage for the 1980 presidential campaign. Tracking years of shifting public opinion and colorful debate between free-market and Keynesian economists, this book illuminates a neglected era of American economic history and shows how Ronald Reagan harnessed a vision of small government and personal freedom that transformed the American political landscape.

Romanticism, Hermeneutics, and the Crisis of the Human Sciences by Dr. Scott Masson, Associate Professor of English. Published by Routledge. 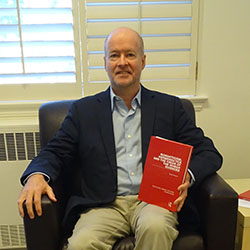 This title will appeal to anyone interested in the humanities, education, or the history of ideas.

The study begins by surveying the field of modern hermeneutics. Noting its repeated crisis of self-legitimisation, it traces its origin to the novel Romantic conception that human nature is self-begetting, and can thus be known only intimately and autonomously rather than objectively.

After providing a historical overview of how human nature had previously been understood, the focus shifts to the attack in Coleridge’s Biographia Literaria on Wordsworth’s 1802 Preface to Lyrical Ballads, and to a reading of some key Romantic texts. It reads Coleridge’s famous definition of the imagination not as a definition of Romanticism but as an attack on Romantic hermeneutics, rooted in the traditional view that man has been created in imago Dei.

This volume considers the New Testament in the light of anthropological study, in particular the current trend towards theological anthropology. The chapters in this volume address the question that humans have been asking since at least the earliest days of recorded history: what does it mean to be human? The presence of this question in modern theology, and its current prevalence in popular culture, makes this volume both a timely and relevant interdisciplinary addition to the scholarly conversation around the New Testament.

“The volume is a collection of essays that are about exploring what the New Testament has to say about human beings. Considering that the New Testament primarily focuses on God and Jesus, some of what’s said about humans is implicit in the text… One of our alumni, Scott Bickle, who just started his PhD in Old Testament at the University of Edinburgh compiled the bibliography.”  - Dr. Reynolds.

The Son of Man sayings are some of the most contested sayings in the Gospels. They preserve a phrase employed by Jesus to refer to himself, yet the meaning of the saying in its various contexts has been hotly debated for centuries. Some identify allusions to other literature in the bible, including the book of Daniel. Others see it as simply being a strange rendering in Greek of an Aramaic phrase that was relatively commonplace.

“The Son of Man Problem is essentially an anthology of 27 essays from 1950 to 2016 on what scholars refer to as the Son of Man problem… there are four students to thank, two are alumni, Scott Bickle, Spencer Healey who is in the Master’s program at Wheaton, and two current students Morgan Clark and Rachel VanderVeen.” – Dr. Reynolds