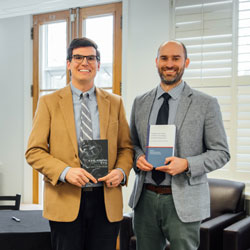 Congratulations to Dr. Benjamin Reynolds and Dr. Paul Franks on the recent publication of their respective works titled Reading the Gospel of John’s Christology as Jewish Messianism: Royal, Prophetic, and Divine Messiahs published by Brill Press and Explaining Evil: Four Views published by Bloomsbury Academic. Dr. Reynolds is Associate Professor of New Testament and Chair of the Department of Biblical Studies and Theology, and Dr. Franks is Associate Professor of Philosophy.

In 2016, Dr. Reynolds co-chaired a conference held by the Enoch Seminar on John the Jew: Reading the Gospel of John’s Christology as a Form of Jewish Messianism. The purpose of the meeting was to explore the Gospel of John’s Christology, traditionally considered “high christology,” as part of the diversity of Jewish messianism within the Second Temple Period. Delegates from around the globe gathered bringing their specializations in scholarship in an open and inclusive forum.

Dr. Reynolds collaborated on this collection of essays with Dr. Gabriele Boccaccini, Founding Director of the Enoch Seminar and Professor of Second Temple Judaism and Early Rabbinic Literature at the University of Michigan. Dr. Reynolds corresponded with various international contributors and edited the selected articles alongside Dr. Boccaccini to bring this volume to print. He also wrote the introduction for the book, one of the essays, and the epilogue.

In Explaining Evil, Dr. Franks brings together four different philosophers to debate their reasons for why evil exists. The authors, two Christians and two atheists, explain how evil fits within their worldview and then respond to the accounts presented by the remaining authors. The debate-style format of the book allows the reader to not only perceive the reasons for each view but also see how they stand up in comparison with other positions.

The four positions represented are Christian libertarianism (by Tyndale University College’s own Dr. Richard Davis), Calvinism (by Dr. Paul Helm of Regent College), atheistic moral skepticism (by Dr. Michael Ruse of Florida State University) and atheistic moral realism (by Erik Wielenberg of DePauw University). Each author brings a wealth of knowledge from their respective academic discipline, and the book covers a wide range of topics, including the nature of free will, Calvinism, evil and pain, and evolutionary ethics.

Each of these works is available through the Tyndale Bookstore or from the respective publishers.