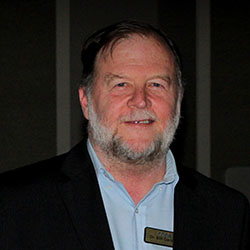 Tyndale welcomes William Gardner, Assistant Professor of Linguistics, to the university college faculty. A member of Wycliffe Bible Translators, Dr. Gardner has worked most recently with the Canada Institute of Linguistics (CanIL).

Dr. Gardner and his wife Lori worked for many years in Africa in language assessment and teaching among other areas. He holds a PhD from Fuller Theological Seminary and a Master of Arts in Linguistics from the University of North Dakota, as well as a Master of Christian Studies from New College Berkeley, California.

Originally intending to study engineering, Dr. Gardner came upon linguistics and discovered that it was essentially ‘language engineering.’ Both disciplines share a commonality around systems. “Where engineering is more about physical systems, linguistics is about language, sound, grammar, meaning, and social systems,” says Dr. Gardner.

He stresses the unique importance of linguistics in our society, including preventing endangered languages from disappearing, for example, Canada’s First Nation languages, such as Cree. As well, in cases of minority populations, promoting literacy among children in the language they speak at home as a priority before learning to read in their country’s national language. “Around the world, UNESCO and others have been promoting a more bilingual education. It is an applied linguistics area that has really been developing a lot in the last few years,” shares Dr. Gardner. Linguistics also plays an essential role in sharing the Gospel globally. “There are hundreds of millions of people living where there is no Bible in a language they understand well. There are about 7000 languages in the world, and at least 1600 do not have the Bible yet,” he notes.

Dr. Gardner looks forward to his time at Tyndale. “Tyndale has such a crucial place in Toronto – it’s a meeting of all the nations and a critical opportunity for reaching many people.” He also stresses the importance of Christian higher education because it provides a foundational base for the next generation. “We live in a society that is so much about people deciding things because of their feelings, and feelings are important, but feelings change rather quickly, and it’s important to have a better foundation for what you believe and why you believe it.”