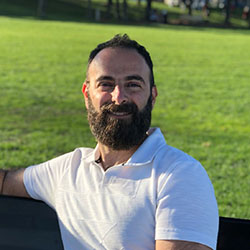 Prof. Yousif began his career as an electrical engineer with a specialty in biomedical engineering from McMaster University in 2005. He worked in this field while volunteering in the church as the youth and young adult leader. During this time, Prof. Yousif experienced firsthand the impact of well-trained leaders. Each of the volunteer pastors at his church had taken the MTS program at Tyndale, and the results were evident. “We started seeing the impact of their training with church growth, the level of teaching and the impact of theological education on their ministry,” Prof. Yousif notes. One of his pastors encouraged him to pursue theological training at Tyndale, which initiated his academic career and calling into ministry.

An Iraqi-Canadian pastor and scholar, his research and teaching are primarily in early church history. His specific focus is on Middle Eastern and North African Christianity and the spread of Christianity along the Silk Road. His other areas of specialization are Syriac Studies, Historiography, Islamic Studies, and Christian–Muslim Relations.

His teaching portfolio includes positions at multiple universities and seminaries in Canada and the Middle East, including the University of Toronto, Tyndale Seminary, and the Arabic Baptist Theological Seminary in Lebanon. He is part of a leading committee of a multidisciplinary project initiated by the Middle East Association for Theological Education (MEATE), which seeks to develop academic resources in Arabic for the seminaries in a Middle Eastern and North African context.

Prof. Yousif looks forward to his time at Tyndale: “We’re moving forward in the global Christianity perspective, recognizing that the history of Christianity is beyond the Western or European focus that was once a dominant topic. I’m very excited to further expand a global focus the way my predecessor, Prof. Ron Kydd, reshaped these courses.”