Dr. Ron Kydd, Associate Professor of Church History at Tyndale Seminary, went on a month-long journey across China in June and July 2014. His focus was to review and discover evidence of the presence of Christianity in pre-1400 AD China. “I wanted to get to as many places as possible to see evidence that others have found or have not even identified yet,” he said. Dr. Kydd explained that existing evidence is fragmentary and interest in these findings has just started to build over the last 25 years. He embarked on the life-changing trip to find pieces of this incomplete story. 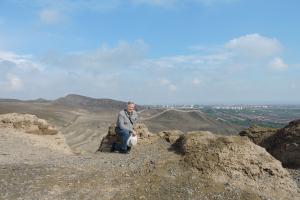 Two people were instrumental to his expedition. Mr. Yang Zhijung, an archeologist and former member of the State Administration of Cultural Heritage, organized the tour using his extensive connections in the archeology world. With his help, Dr. Kydd was able to visit museums and digs that few others have had access to. By Dr. Kydd’s side was Qiu Linguang, his interpreter.

Along the way, Dr. Kydd met many interesting people and had the opportunity to visit numerous fascinating landmarks. He was able to see the famous Early Christian Stele in Xi’an, a tablet erected in 781 AD that documents the history of Christianity in China from 635 to 781 AD. At the top of the stele is the image of a Christian cross standing in a lotus blossom, a symbol typically associated with Buddhism. Dr. Kydd explains that this combination of symbols shows how Christians were attempting to settle into the Chinese culture. This particular blending of symbols appears on ancient Chinese artifacts across the country, indicating that there is more to the story of early Christianity in China than we presently understand.

Dr. Kydd travelled to the famous Longmen Grottoes where archeologists have found graves believed to belong to Christians from the eighth century on the mountain above the Buddhist statues and caves. He then visited a group of Buddhist caves along the Silk Road. One cave among the Bezeklik Grottoes was built in two stages: first in the early seventh century and then in the ninth century, when it was enlarged. On the back wall beside a Manichaean wall painting, Dr. Kydd noticed a badly-weathered image which appeared to be of a Christian teacher.

Dr. Kydd plans to incorporate what he found in China into his classes. His experiences now give his lectures a personal touch – he has always talked about the Xi’an Stele, but now he has his own photos and experiences to add.

There is a growing interest in the history of Christians in China, and Dr. Kydd is encouraged by the positive response to this subject he observed in his classroom and especially throughout China. Research is being done across the country, with the preservation of artifacts and state-of-the-art museums receiving strong government support. “There is a tremendous amount more to be learned,” he says.