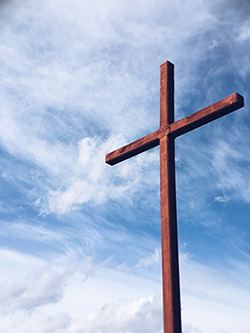 On a dark early morning, three women walk to the cemetery to perform one final act of devotion to Jesus. They would dress his decaying body with sweet smelling spices and wrap him in white cloth. But when they got there to that place of death, they found the stone that had blocked the entrance way to the tomb had been rolled away!

There, in that surprising moment, they see a man. It is then that the astonishing news is announced. “Jesus is not here,” the man tells them, “he is not dead and he is going before you.” It is fascinating how each of the gospel writers captures this moment. They all agree that the women were the first to discover the empty tomb. Matthew says the women ran back to town with great joy and began to tell everyone what they had seen and heard. Luke says they ran back and told everything to the disciples. John says that they told Simon Peter and then he and Peter raced to the tomb to see if it was true.

Mark tells the Easter story in a very different way. He seems to have captured their immediate response. He ends the Easter story with an abrupt open-ended statement with no resolution. His last words are words about the women. They saw the empty tomb. They heard the words: “He is risen, he is not here and he has gone into Galilee before you.” Mark says they left the tomb, "and they fled trembling and bewildered. They said nothing to anyone because they were afraid.” That is how the early manuscripts of the gospel of Mark ends.

Not many people like a hanging, unresolved ending. Mark’s ending of his gospel, at first glance, is a bit of a let down – an abrupt ending to a spectacular story. It leaves you feeling the same way as you might react to a movie that ends abruptly when you wish they had tied up all the loose ends.

I actually like the way that Mark ends the story. Here is the promise of Easter. He who conquered death, this Jesus – who put his life on the line so that we might be free – is waiting. In a way, we are the loose end to Mark’s version of the story. Jesus has already gone ahead of us. He is bidding us to come and join him in a new way of life and living.

An Australian friend of mine, Ross Clifford, Principal of Morling College in Sydney, wrote a book a few years ago with a very controversial title –"The Cross is Not Enough." His point was quite simple, the Resurrection, the empty tomb, completes the Easter story. A story that stops at the Cross is only half of the Good News. The Cross decisively deals with our alienation from God. The Resurrection, however, is the decisive event in history that calls us to live out a new reality of faithful discipleship responsibly and fruitfully. It paves the way for the work of the Spirit in our lives and calls us to live as ‘Reign of Christ’ people.

This is what excites us at Tyndale. It is an incredible opportunity to be involved in the transformation and forming of Resurrection people – all because of this Easter Hope.