This fall General Linda Bond [BRE 1987, MTS 2007], the 19th General of The Salvation Army, received the Tyndale University College & Seminary Honorary Doctorate. The High Council elected her as the Army’s international leader in January 2011. For more than forty years her career developed step by step.  She started with the Salvation Army in 1969 as a Lieutenant and subsequently held the positions of: Divisional Secretary of the Maritime Division, Chief Secretary Canada and Bermuda Territory, Territorial Commander and Territorial President of Women’s Ministries USA Western Territories, and Territorial commander of the Australia Eastern Territory. Throughout her career she lectured regularly at The Salvation Army’s International College for Officers, in South-East London, and was an active member of the Spiritual Life Commission. 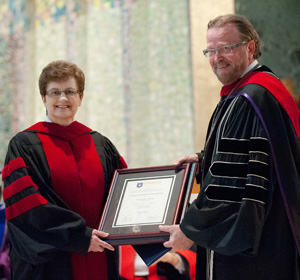 Linda Bond has fond memories of her time at Tyndale and found that it gave a strong start to her life of ministry. At Tyndale’s fall graduation she spoke of the importance of having life goals. Her goal throughout her life was to love Jesus Christ. She sees this as the most important thing we can do in our life.  Everything falls into place if you keep your focus on this goal and obey God’s prompting through the Holy Spirit. At the Salvation Army she believes that key to the whole organization is to stay close to God and be motivated in all that they do by a love for Him. Keeping God in the centre of your life, goals and work are key throughout your life.

General Bond says “The call to officership came as a gentle whisper from the Lord and there has never been a day, not even a second, when I doubted this call.”