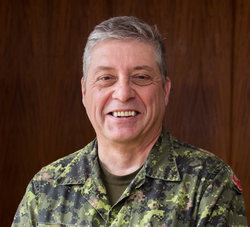 Pastor Phil Ralph [Bachelor of Theology 1981, MDiv 1983] sees firsthand the difficult reality of PTSD (post-traumatic stress disorder) in soldiers coming home from the frontlines. The heartbreaking reality is that “we’ve lost more Canadian soldiers to suicide than we’ve lost to combat in Afghanistan,” says Phil. As Program Director of Wounded Warriors Canada, he can tell you many stories of Canadian Veterans who come home broken. They are often unable to cope when re-entering civilian life. Phil works to build programs that help Veterans move towards healing.

Phil’s experience as Military Chaplain enabled him to understand the horrors of war and what these soldiers live through. He shares one story of a Canadian soldier, who returned from an overseas deployment and was looking forward to returning to a normal life. His mind, which had been in overdrive for so long, continued to think he was in the field and in danger. He had PTSD, which caused depression and suicidal thoughts, and he felt unable to leave his basement. His life was falling apart, and his wife was set to leave him. Wounded Warriors Canada funded a service dog that was trained to recognize anxiety and create a safe environment. Caring for the dog brought routine back to the soldier’s life; he was finally able to leave the house for walks. He convinced his wife to attend the charity’s equine retreat with him, where they built bridges and strengthened their relationship. The soldier wrote a letter to Phil saying, “You saved my life, and you saved my marriage.”

Phil loves being able to make a difference in people’s lives and has a passion for helping today’s veterans experience healing. Over the years he has been the recipient of several awards for his outstanding contributions, including the Canada 125 Medal, the Queen’s Golden Jubilee Medal and the Canadian Forces Decoration.