In Memory of Ian S. Rennie

Tyndale remembers the ministry of Ian Rennie, (former Dean of the Seminary) with deep gratitude to God as we share news of his passing. Dr. Rennie is a big part of Tyndale Seminary’s history, serving with distinction and a "sweeping vision". His evangelical commitment, faithfulness to the Scriptures and vital interest in the task and mission of the church made him a welcome addition to the Tyndale community. He implemented changes that transformed the Seminary from an institution devoted exclusively to training pastors into a school for "pastors, missionaries and lay people." As a church historian, Dr. Rennie upheld Tyndale’s transdenominational identity. He loved and appreciated all church traditions and is remembered as a “great conciliator and bridge-builder”. 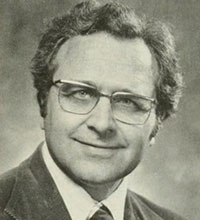 "Ian was a wise friend, mentor, pastor, and teacher to many, a gentle giant who never tired of championing the needs of the Canadian church," said The Rev. Dr. John Vissers, Director of Academic Programs and Professor of Historical Theology at Knox College. “His area of academic expertise was church history but he was equally at home behind a pulpit and a lectern. Many came to faith in Christ through his ministry; he encouraged many to consider pastoral ministry, and he inspired others to pursue evangelical scholarship.”

Ian was a committed Canadian church leader with an international reputation. British historian David Bebbington writes that he was an “astonishingly knowledgeable person in the world of evangelical antiquarianism. He will be greatly missed, but his labours will continue to bear fruit and he has now gone to be with Christ, which is far better.”

Dr. Gary Nelson, President of Tyndale reflecting on Dr. Rennie’s life said; “Perhaps no figure in in Canada in the late 20th century did more to shape the thoughtfulness and theological depth of the evangelical church than Ian. He deeply understood that the church was moving towards diversity and multiculturalism. It was this forward thinking leadership which shaped Tyndale Seminary into the multi-cultural reality it is today.”

"When I think of Ian Rennie, four phrases come to mind: He was a consummate scholar, who seemed to know everything (and more!) about the history of the church in Canada; a passionate theological educator who deeply shaped two of Canada's most influential seminaries (Regent College and Tyndale Seminary); a hope-filled servant of the Body of Christ, deeply devoted to the renewal of his own Presbyterian denomination and the cause of the gospel around the world; and a Christian gentleman whose gracious interactions with people will always be remembered by those of us who knew and loved him." Rev. Dr. Kevin Livingston, Tyndale Seminary.