NAIITS’s (North American Institute for Indigenous Theological Studies) goal is to teach theology from a perspective that “resonates with the culture…of Native North Americans” (NAIITS.com), and their vision is to see Indigenous people flourish in their faith without rejecting their Creator-given cultural identity. According to NAIITS, many Indigenous North Americans influenced by the church in the west believed that an authentic Christian faith meant rejecting their own culture and adopting the secularized culture of the west. This has caused many Indigenous people to either hesitate to embrace the “God” of western Christianity, or even worse, to reject Him outright “because of western Christianity’s perceived cultural requirements” (NAIITS.com). 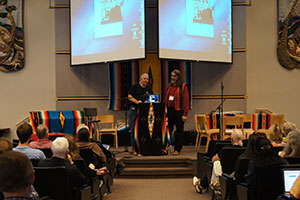 This year is NAIITS’ 10th annual Symposium. Presenters and over 150 guests from across the world are gathering from June 6-8 at the event hosted by Tyndale to engage with the theological issues facing Indigenous people today. This year’s focus is on language and its role in shaping faith. The director of NAIITS, Dr. Terry Leblanc, says “how you use language and the frame of language can influence significant aspects of theology.” One example of this is creation theology. Indigenous cultures use creation-centered language in contrast to anthropocentric (i.e. rational, cognitive, Eurocentric) language when interpreting the creation narratives in Genesis. Terry says, “When you go to the text of Scripture and read the narrative of Genesis 1 and 2, you might come away with a different way of understanding the inter-relationship, interconnectedness, and interdependency of creation, compared to understanding human beings as the pinnacle of creation.”

According to Terry, traditional Indigenous languages are being lost. He states that the purpose of the event “is to look at [Indigenous] values, ideologies and cultural frameworks that the language describe with a view to re-inculcating those in the society even though the language being used to do that is English.”