From January 21st - 27th, around a thousand people gathered at the University of Toronto for the first Jesus Awareness Week at the school’s campus. The event, sponsored by churches in the Greater Toronto Area, was organized by the university’s Campus for Christ team to present to the public Jesus’ identity as Lord. Dr. Scott Masson, Associate Professor of the English Department at Tyndale, led two of the six events including talks entitled “If God is Good, Why Is There Evil and Suffering?” and “Who is the real Jesus?” Other speakers included Joe Boot, Senior Pastor of Westminster Chapel, and Pastor Dan MacDonald who is the lead pastor of Grace Toronto church. 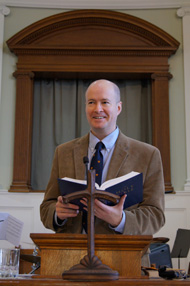 Dr. Scott Masson is an Associate Professor of English at Tyndale University College.

“I think that people aren’t really aware of who Jesus is,” says Dr. Masson, “so the Jesus Awareness Week, in a sense, provides a bit more information about the Jesus they think they know but probably don’t.” The talks were held at the St. George Campus of the University of Toronto in order to reach the wider community. When asked why the event was held at the University of Toronto, Masson replied, “I am possessed by the conviction that the Gospel is true and applicable to all areas of life and no more so than the University, which is where matters of truth, beauty, and justice are dealt with on a regular basis.”

Each of the six sessions was followed by question and answer periods in which the audience was invited to ask their questions either directly, or by text messaging. According to Dr. Masson, the Q&A periods were “filled with good questions.” “From the beginning, this was not only an event for people who didn’t know who Jesus was, but also for people who did know who Jesus was,” Masson explained. “It had symbolic significance that Christ was being brought to their place of learning; a place where there could be hostility and the Christian faith was being defended against people who criticize it.”

Although this was the first Jesus Awareness Week to take place at the University of Toronto, Dr. Masson eagerly hopes that there will be more of these events in the future. For more information, please visit www.jesusawarenessweek.com.