Spencer Healey [BA Biblical Studies & Theology 2015] is the captain of Tyndale’s first competitive men’s ice hockey team. “We’ve had a really good year,” he says. The team has competed in two tournaments and multiple exhibition games, including two against Heritage College. Of their eight games, the Guardians won three, lost four and tied one. For a new team, this is a great start. “We’re definitely getting better and with a few games left to play, we are feeling confident,” says Spencer.

The ice hockey team has generated a lot of interest among current and prospective students. At the opening game against the Heritage Huskies, 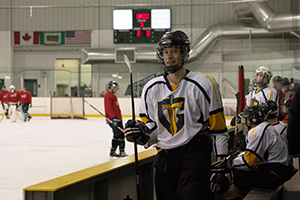 many Tyndale students came out to support the Guardians despite the late hour and the commute. Although Heritage won the game in a shoot-out, Spencer says the whole experience was special: “I thought skating out onto the ice at our first game was pretty cool. There was a surprisingly good turnout to the game and the fans were really into it. I’ve never felt that before.” Being able to compete against established teams gives the team hope that they can enter into a competitive league and play against even better teams in the future.

“We have definitely grown as a team,” says Spencer, describing the “brutal” early morning practices and the rides to and from the rink. “It has been great to make friends with people whom I may otherwise not have had the chance to get to know.”

In women’s competitive volleyball, “there was a huge interest and some great competitive players,” says Joanna Pharazyn [MTS Spiritual Formation 2015], a member of the team. This year, the Tyndale Guardians have had an exhibition game and two official tournaments. They also plan to play at Alumni Day and another exhibition game before the end of the semester.

It has been a successful year for the new team as teammates learned to communicate. “Everyone is from a different background and team,” says Joanna. “We are learning to pick up on each other’s strengths and how we can carry each other in our weaknesses.” Matt Murray, Community Life Director at Tyndale and the team’s coach, has devoted this year to focusing on team-building and taking the “intentional time to develop our skills.”

For Joanna, the most exciting part of the year has been seeing her teammates excel. They have learned to read each other, work together and encourage one another. Before each game, they go through their own personal and team goals. While they play, they encourage each other and celebrate reaching their goals. Volleyball has always been Joanna’s outlet: “It is a sport that challenges you personally and as a team.”