Commissioner Bond becomes the third woman and the fourth Canadian to hold the post of General of The Salvation Army since the international church and charity organization was founded 146 years ago. Linda Bond earned two degrees from Tyndale University College & Seminary; she graduated with a Bachelor of Religious Education in 1987 and a Master of Theological Studies in 2007. 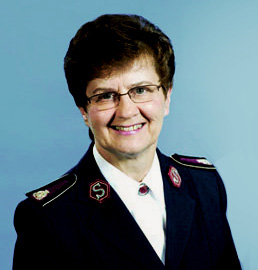 Linda Bond was in the Master of Theological Studies modular program of Tyndale that provides a place for students deeply rooted in their workplaces during the day, to gather for theological and spiritual reflection. Dr. Gary Nelson has taught in the modular program and finds “these students desire to continue to learn to be better followers of Christ in the places they work but they cannot stop working to go to school. The accessibility of the modular program is critical to that possibility.”

In reflecting on Commissioner Bond’s time at Tyndale Dr. Nelson said, “I was honoured to be one of Linda's professors. Linda worked on her Master of Theological Studies during a time in which her job took her around the world. She brought to her class a commitment that required juggling of class time and work priorities. She would often tell me that she had to travel that night to meetings overseas but she never missed a class. She serves as a wonderful example of the quality of people studying at Tyndale including our modular MTS and MDiv programs. We are proud to call Linda an alumna of Tyndale.”

Speaking just after her election, Commissioner Bond said: “I love the Lord Jesus Christ and pledge my utmost obedience to him. I am absolutely committed to a life of praise and thanksgiving to God. We, The Salvation Army, need to be an Army of praise and thanksgiving to God and we must place our trust in God. We need his Holy Spirit to come mightily on The Salvation Army.”

Her commitment to an integral faith of evangelism and justice is rooted in her Salvation Army heritage, and Tyndale celebrates the recognition Commissioner Bond has received for her leadership and her call to this new task.