The Olympics come to Vancouver this winter. The first part of the excitement began with the Olympic torch run, going across Canada. Tyndale had a hand in carrying the torch, courtesy of one of its alumni, Danielle Rourke. 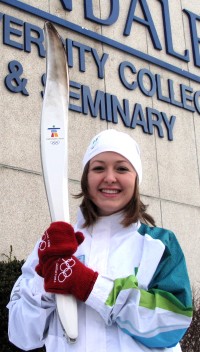 Danielle, who graduated from Tyndale in 2007 with a BA in Religious Studies, now works at Tyndale as the Counselling Services Coordinator. She won a contest with Coca-Cola to carry the torch in Cornwall on Monday, December 14.

“It was so exciting, and I was so nervous,” said Danielle. “I’m not a big runner, and I orginally thought it was 100 kilometres. I didn't even understand how that was possible. But when I found out it was only 300 metres, then I just wanted to make sure that I completed the run and didn't drop the torch."

Danielle began training for it once she found out about winning the contest in October. However, nothing could prepare her for the excitement that came with actually carrying the torch.

“You think about all the things you’re going to do with the torch before the day, but when the moment actually happens, the excitement just takes over,” said Danielle. “My arm was getting tired when I was holding the torch and I didn't want to drop it, so I switched hands.”

Danielle won a contest that involved writing about her dedication to environmentalism. Care for the environment has always been a big part of her personal life. This carried over to her work at Tyndale, as she sought to improve the school’s environmental care by doing simple tasks, such as creating a scrap paper bin in the photocopy room. It fits in with the school’s philosophy of “creation care,” being responsible for the environment God created, and it is close to Danielle's heart.

If you would like a photo with the Olympic torch, you can visit the Tyndale Marketing Office (in the business hallway just before the Philosophy faculty offices) the week of Feb. 16 from 9 a.m. to 4 p.m. We are asking for a $1 donation towards Tyndale Missions.

“I’m a bit of an environmental nerd,” she said with a laugh. “But it’s really important to me that we all do the little things to make our world a little bit better.”

Her passion for the environment, and her efforts to improve creation care at Tyndale, led to her receiving a Green Award from the Tyndale Seminary Student Council for February.

She had to keep notice of carrying the torch a secret for several months. Now though, she is happy to tell anyone about it. She also enjoys getting to show the torch to her friends and family.

“I decided to buy it so that I could keep it and remember what that experience was like,” she said. “But I already know it’s something that I’ll never forget. And the looks on the faces of people when they hold the torch, that always makes my day.”