After extensive research that included reviewing the contents of 750 boxes in the personal archives of Margery Perham at Oxford University, Dr. Brad Faught returned to Oxford for the launch of his book, Into Africa: The Imperial Life of Margery Perham. Dr. Faught, Associate Professor of History at Tyndale, has authored the first biography of Perham, a forerunner in African studies.

As a historian, Dr. Faught became interested in Perham because she pioneered the study of modern Africa as an academic discipline in the early 20th century. “Once I really started to read what she had written and about her, [I discovered] she was a very compelling figure,” Faught notes, “[Her] life was really interesting, and important, and exciting.” 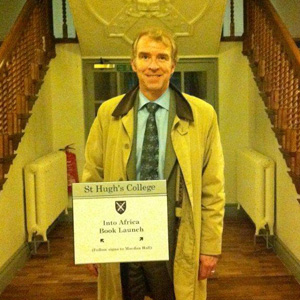 Throughout her life, Perham traveled repeatedly to Africa and wrote and taught prolifically on British Imperial administration in Africa. As nationalism rose she became an unofficial apologist for the empire while remaining sympathetic to the nationalist movements. Dr. Faught notes that Perham sought to discover, “How independence can be brought about in such a way that these countries will thrive.”

The book, which took about 2 years to write, was debuted February 23, at St. Hugh’s College, Oxford University where Perham graduated in 1917. The book launch was attended by historians, professors, and students, as well as by family members of Perham.

Into Africa: The Imperial Life of Margery Perham is an important book to both British and African history. Tyndale would like to congratulate Dr. Faught on his successful completion and launch.

Dr. Faught was interviewed on TVO on March 10 for the program, Saturday Night at the Movies: Lost Empires. To watch his interview, click here.