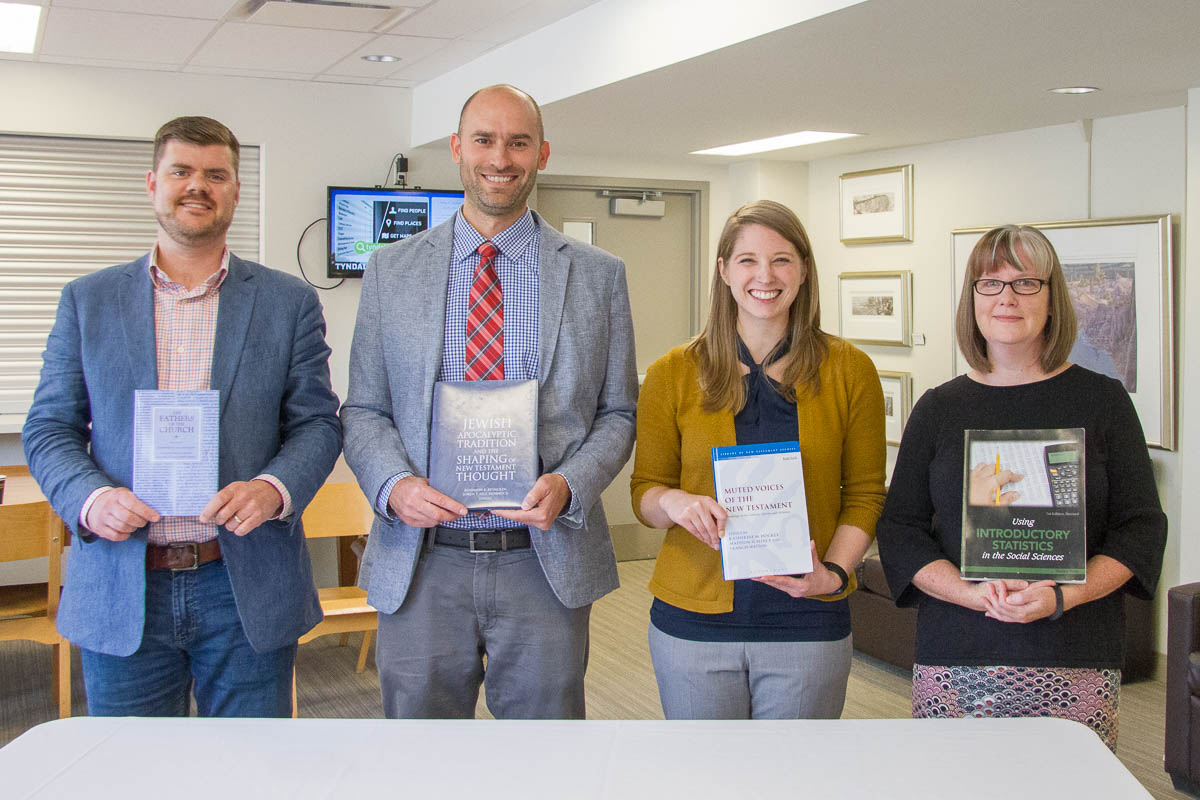 A number of University College Faculty recently published works exploring topics related to their specific fields of expertise. Each of these publications can be ordered through the Tyndale Bookstore.

The Jewish Apocalyptic Tradition and the Shaping of New Testament Thought, edited by Loren T. Stuckenbruck and Benjamin E. Reynolds, PhD, Associate Professor of New Testament within the Biblical Studies and Theology Program, is a collection of eighteen essays covering each book of the New Testament. The essays were written by international scholars of the New Testament and early Judaism. Rather than viewing “apocalyptic” as primarily concerned with the end of the world, the contributors consider the heart of Jewish apocalyptic tradition as the revelation of heavenly mysteries. They seek to show how that revelation has shaped the New Testament’s disclosure of the heavenly world and God’s wisdom, including “the mystery of Christ” that is now revealed (Eph. 3:4–5).

Muted Voices of the New Testament, edited by Madison Pierce, PhD, Assistant Professor, Biblical Studies and Theology, along with Katherine M. Hockey and Francis Watson, is a collection of essays about the Catholic Epistles and Hebrews. New Testament studies often tend to give preference to the works of Paul and the Gospel writers to the extent that these epistles are disregarded. This collection hopes to highlight the theology and diversity of early Christianity by giving these Epistles (these “voices") an opportunity to be heard. Dr. Pierce contributed an essay on the Holy Spirit speaking directly to the contemporary community in Hebrews 3–4. This passage is often read as though the Spirit speaks only through Scripture, but Dr. Pierce argues that the author of Hebrews envisions his readers hearing the Spirit “today.”

Nancy Ross, PhD, Associate Professor of Psychology, designed the publication, Using Introductory Statistics in the Social Sciences, for the beginner. It introduces students to the fundamental concepts of statistics commonly used in the Social Sciences. This textbook was designed with the goal of streamlining the material so that students will (1) have a solid grasp of the underlying concepts needed to understand basic hypothesis testing in the Social Sciences; (2) be exposed to a wide array of statistical options for analyzing data; (3) develop the writing skills necessary to document results of these analyses; and (4) maximize their ability to determine the appropriate conditions under which each type of statistical analysis should be used. Topics include basic descriptive statistics, t-tests, analysis of variance (ANOVA), correlation, and chi-square analyses.  A final chapter focuses on the decision-making processes involved in choosing which statistical analysis is appropriate for different research scenarios.

David Robinson, PhD, Adjunct Professor, Biblical Studies and Theology, wrote the introduction and notes to Francis X. Gumerlock’s translation of Tyconius’ works in The Fathers of the Church: Tyconius of Carthage. Tyconius was a North African, living and writing in Carthage in the late fourth century, a generation before Augustine. He is known for two major works: (1) the Book of Rules and (2) his Exposition of the Apocalypse. The Book of Rules is a little handbook on biblical hermeneutics, in which Tyconius analyzes the way in which the Holy Spirit communicates to the church through Scripture. The Exposition is an application of the hermeneutical theory set out in the Book of Rules. His commentary shaped the reception and interpretation of the Apocalypse in the West for the next 800 years. Almost all of the commentators in the Medieval Latin tradition followed his interpretation and quoted him extensively. While expositors of the second and third centuries viewed the Apocalypse of John, or Book of Revelation, as being mainly about the time of Antichrist and the end of the world, in the late fourth century, Tyconius interpreted John's visions as figurative of the struggles facing the Church throughout the entire period between the Incarnation and the Second Coming of Christ.