Tyndale University is pleased to bestow its first Distinguished Service Award to Reverend Mabel Adeline “Addie” Aylestock, who graduated from Tyndale (then Toronto Bible College) in 1945. 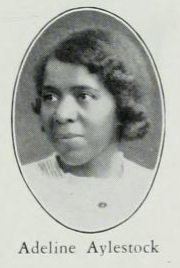 The purpose of the award is to publicly recognize an individual whose work has exhibited exemplary service and who has lived a Christian life and witness that inspires others to do the same.

Rev. Aylestock moved to Toronto in her late teens. The Great Depression was about to begin, and as the first born of eight siblings and the daughter of parents of modest means, the city offered the only hope of new opportunities. For this young woman who had dreamed of becoming a minister ever since she was a child, the city was indeed the beginning of a future full of new possibilities, even as the culture around her told a different story of inequality, racism, and prejudice.

Rev. Aylestock was born in Glen Allan, Ontario in 1909. She was a descendent of immigrant farmers, many of whom were freed or escaped slaves from the United States that had settled in a community called Queen’s Bush – an expansive area stretching from Waterloo County to Lake Huron.

The Aylestock family were members of the British Methodist Episcopal (BME) church, a Protestant church in Canada with roots in the African Methodist Episcopal Church of the United States. Young “Addie” Aylestock was particularly devout. She had felt a call to ministry early in her life, and was convinced that she would one day become a minister, something that seemed unlikely for most women at the time. Once in Toronto, she worked in domestic service for a number of years, cooking and cleaning for wealthy families since there were few avenues of employment for Black women.

During this period, Rev. Aylestock joined a BME congregation in the downtown core on Chestnut Street. Founded in 1856, the church served as a spiritual and political centre for the city’s growing Black community and a place where African Americans fleeing slavery had found refuge a century before.

While serving in the church, a growing desire to become a missionary led her to enroll at Toronto Bible College (TBC), now Tyndale University. In the 1945 TBC yearbook, Rev. Aylestock was described as “shining for Jesus,” serving on the TBC Missionary Committee, and determined to go to Liberia to serve after graduating. God had other plans for her. She continued to serve faithfully in the BME church in Toronto and was encouraged to consider becoming a deaconess, the highest leadership role available to women in the BME at the time.

Rev. Aylestock’s first post was in Africville, a Black community on the outskirts of Halifax, Nova Scotia. This community was first established in 1848 when Black settlers purchased land in the area. Although the city of Halifax collected taxes in Africville, even into the mid–20th century, living conditions were difficult with little to no city amenities such as sewage, clean water, or the disposal of garbage. Despite these difficult conditions, the Africville community was strong and vibrant and it persevered and thrived, much like Rev. Aylestock.

Following her time in Africville, Rev. Aylestock was transferred to Montreal, Quebec, and then back to Toronto. Throughout this time, she had assumed the responsibilities equal to those of a minister in the BME church, yet was unable to be ordained because she was a woman. This finally changed when the BME reconsidered its regulations around ordination in the 1950s in response to the leadership role already evident in Rev. Aylestock’s ministry. Following a resolution, Rev. Aylestock was ordained as a pastor, becoming the first woman minister of the BME and first ordained Black Canadian woman minister in Canada. 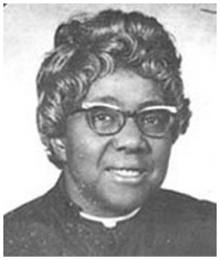 Over the next 20+ years, Rev. Aylestock served various congregations, pouring into the communities she served so diligently. From 1958 to 1982, she also served as general secretary of the BME Conference. Rev. Aylestock passed away in 1998 at the age of 88.

Despite the many obstacles faced in her life, including racism, poverty, and gender bias, Rev. Aylestock remained true to God’s call. Rev. Aylestock dedicated her life to serving the Church and paved the way for generations of Black Canadian women in ministry. Tyndale is thus honoured to recognize Rev. Aylestock with the Distinguished Service Award. May her life and legacy continue to encourage future trail-blazers and spiritual leaders.