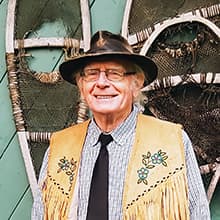 Hunting caribou and gathering spruce boughs in –40ºC temperatures were just a few of the daily activities Rodney Bartlett (BRE 1969) and his wife Liesel experienced among the James Bay Cree of Quebec.

Rodney first felt the call to cross-cultural Christian service as a teenager and Liesel in her early twenties. As the couple served in various capacities, with Rodney deepening his critical thinking skills and Biblical knowledge while studying at Tyndale, their path to the work of Bible translation became clear. In November 1973, the Bartletts accepted an assignment to serve the James Bay Cree, a group that did not have Scripture in their own language.

“The first winter, we were asked to join a Cree family in their bush camp and saw firsthand their traditional way of life,” says Rodney. As the Bartletts spent time with the families and gifted bilingual speakers, they observed, recorded, and analyzed language data and trained a team of mother-tongue translators who then drafted the texts in Cree. In 2001, the New Testament in the Southern dialect of the James Bay Cree was published, and in 2016, it was completed in the Northern dialect.

“Today, about 20,000 James Bay Cree have the New Testament available in their own language, in print, online, some of which is also in audio,” says Rodney.

Over their 50 years of service in the work of Bible translation, the Bartletts have produced approximately 40 titles of all types of literature, developed a Cree literacy program for the school board, and equipped staff with literacy skills and linguistics. In their later years, they became involved in One Story, an associated organization that translates the Bible in an oral, episodic fashion. The assignment took them to parts of Africa and the Far East and resulted in people in various parts of the world coming to faith through having the Bible in their own language.

“I would say to anyone interested in the area of Bible translation to, ‘Go for it!’” says Rodney. “Although it may seem like a daunting task, you are not alone.”