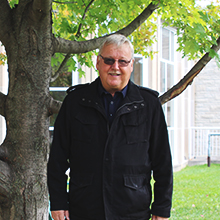 Robert came to Canada from Northern Ireland when he was in his twenties. He felt led to study at Tyndale (OBC), where he met and married his wife Sheila. They served together with the Africa Inland Mission (AIM) training hundreds of national leaders for church ministry and later helped to start Nassa Theological College in Tanzania. Returning to Canada, Robert served as Personnel Director of AIM for several years before being seconded as Director of MissionPrep, an organization that prepares missionaries and international workers for intercultural ministry abroad.

MissionPrep soon provided cross-cultural training for the newly formed TIM Centre founded by Dr. Irving Witt in 1998. After working a few years with the TIM Centre, Robert became the Director, (succeeding Dr. Robert Morris) and oversaw the launch of the Diaspora Initiative. This expanded the focus of the Centre to equip multicultural leaders for intercultural missions in local Canadian cities. The vision of the TIM Centre became “the church, from all nations to all nations,” and it became the guiding framework of the TIM Centre in training and resourcing emergent leaders for intercultural ministries. “At TIM Centre we believe our God celebrates diversity and so should we. And so should his church,” notes Robert. With an entrepreneurial mindset, Robert and his team have developed strategic partnerships and new programs that respond to the current needs of the immigrant community. Recently Robert transitioned from the role of Director to a leadership consultant and will continue to serve the TIM Centre and the immigrant community, with Rev. Timothy Tang serving as the new Director.