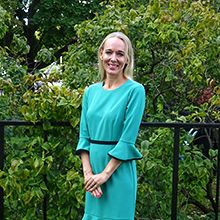 During her studies at Tyndale, Karyn often felt conflicted knowing she was not called to traditional full-time ministry like many of her classmates. She attended one particular chapel where Michael Cassidy (a Christian political leader) inspired her. “He gave this wonderful sermon saying that not all of us are called to into full-time ministry. Some of us are called specifically to be a light to the world. That was the most liberating message for me,” Karyn shares. His words helped alter the direction her career would take as a leader in the secular world.

As the founder and CEO of DK Leadership, Karyn specializes in Emotional Intelligence for a clientele ranging from young people seeking clarity for their future careers to executives of fortune 500 companies pursuing leadership development. Although her work may not obviously intersect with her faith, she finds that people often ask her about what she believes in. These encounters at business conferences and places outside church settings have allowed for honest conversations about faith with people who would not normally enter a church.

She has been sought out by many organizations as a motivational speaker, delivering over a thousand keynote addresses around the world. Karyn also makes regular appearances on major media outlets, including Good Morning America (USA), and she is the Resident Leadership & Relationship Expert for Cityline (an internationally syndicated talk-show).