On May 9, 2015, Reverend Minho Song received an Honorary Doctorate from Tyndale Seminary. President and Vice Chancellor Dr. Gary Nelson introduced Pastor Song, saying, “It is with great pleasure and our honour that I present for the degree Doctor of Divinity Honoris Causa, Minho Song, respected preacher, pastor, mentor, teacher and global leader committed to the mission of God through the church.” 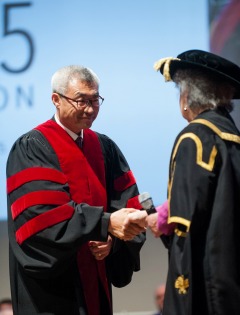 Minho Song immigrated to Canada from his home country, South Korea, in the 1970s. He came to know the Lord Jesus Christ in his first week of university and shortly after, received a call to pastoral ministry. He received his Bachelor of Arts at the University of British Columbia, his Master of Divinity and Master of Theology at Regent College and his doctorate in Intercultural Studies at Trinity Evangelical Divinity School. For his doctoral thesis, Minho Song researched the patterns of religious participation among second generation Koreans in Toronto.

Between 1993 and 2000, Pastor Song served on the adjunct faculty at Tyndale Seminary. He then served as a missionary with OMF, teaching at Asian Theological Seminary in the Philippines while his wife, Meja, taught at Faith Academy. Since 2004, he has been the senior pastor of Young Nak Korean Presbyterian Church of Toronto, a faith community he has been involved with since 1988.

Pastor Song’s passion is transforming churches to be more missional. He firmly believes that all the members of the church have been sent to the world to be part of God’s Mission. “This has been and is his leadership gift to the Young Nak Church: guiding and facilitating a strong emphasis, not only on overseas missions to Kyrgyzstan and Cambodia, but also on local outreaches to Southeast Asians living in the Greater Toronto Area,” said Dr. Nelson. The Young Nak Church has grown from a community with Korean and English congregations, to one with Burmese, Laotian, Vietnamese and Thai congregations as well.

Pastor Song also believes in training and raising up God’s workers for the next generation. He served for many years as both board member and president of Catalyst Leadership Inc., an organization dedicated to raising healthy leaders for Asian churches in North America. In recent years, Pastor Song has been training future missionaries and pastors as an adjunct professor at Asian Research Institute of Language and Culture at Handong University, South Korea, and at Asian Theological Seminary, Philippines.