"Commencement Chapel is always a special time. A place where, just for a moment, all of our programs converge," remarked Tyndale University College & Seminary’s president Dr. Gary Nelson at Commencement Chapel on Wednesday, September 10, 2014. That morning, the Tyndale community gathered for chapel to celebrate Dr. Barry Smith’s installation as Senior Vice President Academic and Dean of the University College and Tyndale’s 120th anniversary. 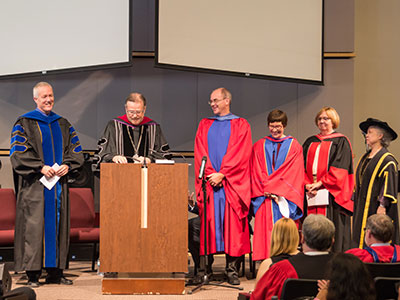 Dr. Barry M. Smith was appointed to his new post on May 1, 2014. This role is the “culmination of 26 years that he has given to Christian education,” said Dr. Nelson as he introduced Dr. Smith to those in attendance. Before coming to Tyndale in 2011, Dr. Smith served as Director of Admissions, Dean of Students and then Vice President for Student Life at Roberts Wesleyan College in Rochester, New York, for 24 years.

Born in Toronto, Dr. Barry Smith attended Ontario Bible College for one year before completing his Bachelor of Arts degree at Kingswood University in Sussex, New Brunswick. After four years of serving in pastoral ministry, Dr. Smith completed a Master of Divinity degree at Asbury Theological Seminary. In 2002, he received his PhD in Higher Education Administration from the State University of New York (SUNY) in Buffalo, New York.

“He has a passion and commitment to Tyndale,” said Dr. Nelson. “He came with a desire to shape a vibrant university.”

At Commencement Chapel, President Nelson also welcomed Dr. Natasha Duquette in her new position as Associate Dean of the University College. He congratulated Dr. Janet Clark, Senior Vice President Academic and Dean of the Seminary, on her recent appointment as Vice President of the Association of Theological Schools of North America. Dr. Clark warmly welcomed Dr. Michael Krause, Director of the Internship Program and Assistant Professor of Christian Ministry, to the Tyndale Seminary faculty.

After the chapel service, faculty, staff and students gathered for the Tyndale 120th anniversary party and barbecue, complete with trivia games, a photo booth and two beautiful anniversary cakes.