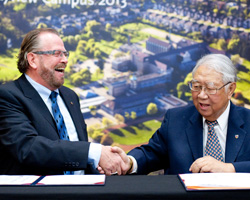 It is with sadness that Tyndale University College & Seminary venerates Dr. John Kao who passed away Sunday March 24th at 79. Kao was a key Chinese church leader, who has served as the Honorary Chairman of the executive board of the Association of Canadian Chinese Theological Education (ACCTE), and received an honourary doctorate from Tyndale.

Dr. Gary Nelson commemorates John ‘ He was an amazing man who is the founder of the Association of Chinese Evangelical Ministries (Canada)(ACEM) in Toronto, he has been an integral in building the church and developing the next generation of leaders. As a dear friend of myself and many at Tyndale, we will miss him greatly.’

A memorial service for Kao will be held on Saturday, March 30, 2013, at the Richmond Hill Christian Community Church at 10 a.m. Visitation will be begin at 9 a.m. and end at the service time.