Dr. Newman, an alumnus of Tyndale, has spent more than 30 years working in student ministry in the Caribbean and around the world. He is currently the president of the Caribbean Graduate School of Theology in Kingston, Jamaica, Chair of the Council of Trustees of the Oxford Centre for Mission Studies in Oxford, England, and an International Deputy Director of the Lausanne Committee for World Evangelization. 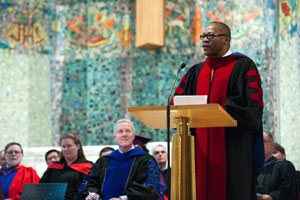 When he first heard about the award, Dr. Newman said he was, “quite surprised and very pleased to accept because of what Tyndale means and what Tyndale has done for me in my own formation.” He received his BRE from Tyndale in 1976, then called Ontario Bible College.  Recalling his time as a student, Dr. Newman fondly remembers the “professors who really molded and in fact shaped [my] life.”

Eunice Smith was honoured as this year’s Distinguished Alumna at the ceremony for seminary graduates. Mrs. Smith earned her MDiv in 1983 and was the first female to be awarded this degree from Tyndale Seminary, then called Ontario Theological Seminary.  In response to God’s calling, she spent 60 years in ministry together with her husband, including 25 years in various cities in Ecuador and 12 years in Mexico. Upon returning to Canada in 1996, Mrs. Smith continued to teach Bible and Greek courses in Latin America in both English and Spanish.

Mrs. Smith encourages students, “I would like to see students…enjoy their studies. Ask the Lord to give you joy in it.”  This joy is something that she has experienced through her decades of service and learning and something she continues to experience as a teacher.  This spring, there were 163 degrees, ten diplomas and six certificates given out to graduates from Tyndale University College & Seminary.