The Tyndale University community expresses its deepest condolences to the Morris family on the passing of Dr. Robert Morris. 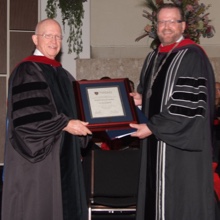 Bob Morris is an internationally known missionary statesman with a lifetime calling and commitment to the global church. He has been involved in mission since the day he was born to missionary parents working with SIM in Nigeria. Since 1968 he has worked in various roles with Interserve (Canada). He spent 18 of those years living and ministering in India, Pakistan, and Cyprus. Bob has been a leader in the development of strategies for placing Christian professionals in countries that are not open to vocational missionaries. During his roles as Area Director South, Canadian Director and Acting International Director of lnterserve, his responsibilities took him to Afghanistan, Australia, Bangladesh. Bhutan, China, Cyprus, Egypt, the Gulf, India, Jordan, Kyrgyzstan, Lebanon, Malaysia, Nepal, New Zealand, Pakistan, Philippines, Thailand, Tunisia, Turkey, United Kingdom and the United States.

Throughout his life Bob has been an innovator and catalyst for mission initiatives. He worked with others in the formation of Missionfest, MissionPrep, Canadian Tentmaker Network, Toronto World Mission Fellowship, Tyndale Intercultural Ministries Centre, Lausanne Canada Committee and in the publication of The Guide to Best Practice in Short Term Mission (EFC).

Bob is known for his influence and care for young leaders. His passion in seeing them thrive was evident as he came alongside to mentor, encourage and support them in their lives and ministries. Bob will be greatly missed by many as he lived a life that touched so many.