A few years ago, a group of youth from a Toronto community housing area was recruited for a soccer camp by Jevon Bryan [BA Human Services – Social Service Work 2017]. They did not get along with each other, and some were in tough circumstances, but they wanted to improve their soccer skills. Jevon, their coach, made it clear on the first day that they were a family. Their training began not with soccer drills but with team-building games. As they got to know each other, they began to accept one another. He encouraged them, listened to their stories and pushed them to become better players and leaders. Through the summer, they began to believe in themselves. Some of the youth who had considered suicide found reasons to live; others who previously had no hope for the future began to dream. 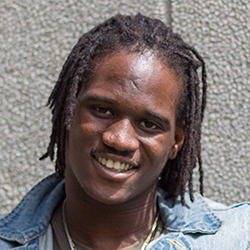 At the end of the summer Jevon saw a need for continued support for youth, so he asked the local community centre to allow him to meet with the youth in one of the centre’s breakout rooms free of charge. He did this on a regular basis, mentoring them and teaching them practical life skills through activities, such as organizing events for the whole community. When the manager of the community centre found out what Jevon was doing, she found funding for him, and his work became an official part-time job. Jevon initiated and developed his own program, continuing to guide, inspire and give hope to youth. “I’m a farmer,” he says. “I’m planting these seeds, hoping they bloom.”

In recognition of his work, Jevon recently won the Royal Bank of Canada’s Make 150 Count award. The honour is based on Jevon’s efforts in mentoring youth, as well as his student leadership at Tyndale, where he participated in founding the Black Educators of Tyndale club.