Family, friends, faculty and staff cheered on this year’s Seminary graduates at a joy-filled livestream ceremony on Saturday, May 15, 2021. More than 1,000 participants tuned in live to the event – which has since been viewed 1,400 times – and many shared words of affirmation and encouragement with the new graduates in the live chat.

“God has called you, and God has placed you and prepared you for this moment,” said Dr. Arnold Neufeldt-Fast, VP, Academic and Dean of the Seminary, in his opening address. “The Church and the world that God loves need people like you now – people that are able to point to God's coming kingdom with intellectual strength, moral integrity and spiritual vitality.”

More than 350 graduates will celebrate their achievement this month, half of whom are from the Seminary.

“Your time at Tyndale, including this past year, has been part of the shaping, honing and preparing that God has done in you to equip you for all that will come next. This is a day to celebrate. We thank God for you.” 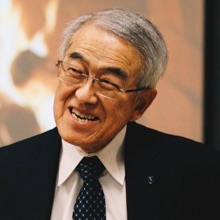 The event also honoured Mr. Winston Ling, who was awarded the Doctor of Divinity, honoris causa. The purpose of the honorary degree is:

Karina Dearborn, Mr. Ling's youngest daughter, received the award on his behalf, saying, "My father has been on Team Tyndale for as long as I can remember. He has worn many hats during his tenure at Tyndale, including finance, administration, recruitment, marketing, retention and advancement ... He would cheer every time we recruited a new student or donor. My father and I would have long, late-night conversations about his visions for the school, how it could touch others, and the many people he connected with that day … We would often reflect that perhaps his long and successful corporate career was really the training he needed to take on full-time work at Tyndale.”

Dr. Janet Clark, Dean Emerita, then delivered a message of encouragement to the graduates: “At the end of each day as we stand before God, the most important question we have to ask ourselves is not, ‘What have I accomplished today?' but 'Have I been faithful this day to what was set before me?'"

"Whether your post-graduation life in service leads to big spaces or small spaces, recognized or unrecognized, prestigious or hidden, be faithful in little things. For on the last days, what will matter is not your credentials, but hearing the words, ‘Well done, good and faithful servant.’"

Congratulations to all the 2021 Seminary graduates! May the Lord bless you and keep you as you begin this next chapter in your journey.