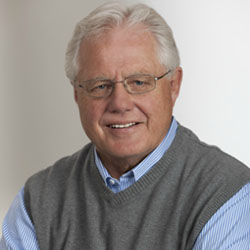 The Tyndale Community celebrates President Emeritus Dr. Brian C. Stiller on receiving the Biblical Higher Education Award from the Association of Biblical Higher Education (ABHE). This award is bestowed upon an individual who demonstrates a life of integrity, strong leadership in higher education and an educator who has championed the cause of biblical higher education. Dr. Stiller was recently honoured at the ABHE meetings in Orlando, Florida, and was selected for the award because of his outstanding leadership in postsecondary education.

Dr. Stiller served as President of Tyndale University College & Seminary from 1995 to 2009.  During that time, he led Tyndale through a financial challenge and brought Tyndale back to fiscal health and then through a number of transitions, which included a name change, securing university status legislated by the Province of Ontario and the purchasing of the new Bayview campus. After stepping down from his presidency role, he continued to serve as President of the Tyndale Foundation, spearheading a multimillion-dollar campaign that raised over $50 million dollars towards the purchase and development of new programs on the new campus.

Since 2011, Dr. Stiller has served as Global Ambassador for the World Evangelical Alliance, a global ministry that works with local churches throughout the world to proclaim the Good News of Jesus and serves more than 600 million evangelical Christians and their communities.

Dr. Stiller is the founder and former editor-in-chief of Faith Today magazine and hosted a national weekly television program called Cross Currents. He has authored twelve books, and his most recent publications are Find a Broken Wall: 7 Ancient Principles for 21st Century Leaders (Castle Quay Books, 2012) and What Happens When I Die?: A Promise of the Afterlife (Castle Quay Books, 2012).

From 1983 to 1996, Dr. Stiller’s leadership as President of the Evangelical Fellowship of Canada gave him a national presence, as a voice for people of biblical faith. Through his ministry, he helped move the evangelical community into the mainstream sphere of influence and commentary.