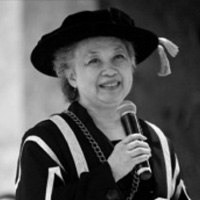 Dr. Stephanie Ling was appointed to the position of Chancellor in April 2012 and served in that capacity until October 2015. As Chancellor, she inspired and celebrated Tyndale’s successes and served as a bridge between Tyndale and the community by bringing external and internal communities together.

Dr. Ling was born and raised in Victoria, British Columbia where she attained a B.Ed. degree at the University of Victoria. She went on to earn an Honours B.A. in English and a Master of Education at York University and, in 2008, attained her doctorate in Educational Administration & Leadership from the University of Toronto. She has taught and held leadership positions at several schools, most recently being the co-founder and principal of the Children’s Primary Centre and Cornerstone Montessori Prep Schools at the Toronto and Don Mills campuses. Dr. Ling has served as Chair of the Board of Governors for Knox College at the University of Toronto, and is currently a member of Senate at York University as well as serving on the Board of TST (Toronto Schools of Theology).

“Dr. Stephanie Ling brings to the role of Chancellor a unique blend of commitment to her Christian faith and credibility from years of educational efforts in the community,” says Tyndale President, Dr. Gary Nelson. “Dr. Ling is a remarkable educator and her involvement in the community through participation on boards and committees around the city has made her an amazing bridge builder. She reflects the qualities and character that we desire to see in our students as they graduate and move out into their respective places of vocation.”

She initiated the Chancellor’s Circle, a dedicated group of volunteers who helped to engage the external community with the life of Tyndale through events on campus. Some of her projects were the Academic Reform Symposiums with Ontario’s University Presidents, Alumni Easter Celebration, Entrepreneurial Awards, Remenyi Music Fund and various social events.