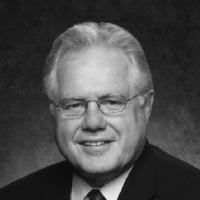 Following his years as President of Tyndale University College & Seminary, Brian Stiller was appointed as its Chancellor in 2009. Stiller was raised in a Pentecostal minister’s home on the prairies. Educated at the University of Toronto (BA in History), Wycliffe College (Master of Religion), and Gordon-Conwell Theological Seminary (Doctor of Ministry), he has received honorary doctorates from Briercrest College and Trinity Western University.

In 1983, he was appointed President of the Evangelical Fellowship of Canada.  This provided him with a national profile as a voice for people of biblical faith.

In 1997, Brian became President of Tyndale University College & Seminary and led the school through major restructuring. During his tenure Tyndale received university status from the Ontario Government, a 56-acre campus was purchased, and a major capital drive lifted the school into a new era of growth. In 2009 Stiller retired from his presidency. After serving as Chancellor for a year, he was named president of the Tyndale Foundation, where he served for two years.